How to Bet on Tennis? 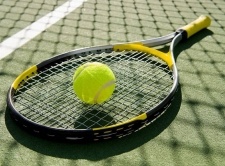 Tennis is one of the most popular sports in the world to bet on and it is easy to see why. The sport is played throughout the 12 months of the year and there are upwards of 60 tournaments taking place, each with several dozen matches scheduled, that are ready to be bet on.

Betting on tennis gives you plenty of opportunity to make bets, and lots of them. You can usually bet on men’s singles, women’s singles and doubles matches at every major tennis tournament, plus online bookmakers almost always offer futures bets for the tournament winners.

There may be more than 60 tennis tournaments across the calendar year but there are four that stand out from the crowd, The Grand Slams. This quartet of tennis tournaments are the ones that every professional tennis player dreams of winning at least once during their careers.

Following the Australian Open is the French Open, which usually takes place in May and June in Paris, France. This Grand Slam tournament takes place on a clay court and has been part of the tennis calendar since 1891.

Wimbledon is perhaps the most famous Grand Slam tennis tournament of them all and the oldest having been established back in 1877. Played on grass, Wimbledon runs in June and July in London and the tournament that everyone wants to win.

Rounding off the Grand Slam tournaments is the US Open in New York, USA during August and September. The US Open is the second-oldest Grand Slam tennis tournament after Wimbledon, having been around since 1881.

While these Grand Slams are the highlights of the tennis schedule, look out for the David Cup and Fed Cup. The Davis Cup is a men’s tournament that sees players compete in teams. The Fed Cup is the women’s equivalent and both, along with the Grand Slams, often see online bookmakers run special offers and promotions.

When it comes to betting on tennis you will often hear the term “The Big Four”. This is in relation to the men’s tournaments where four players have dominated the circuit for the past 14 years.

Roger Federer, Novak Djokovic, Andy Murray and Rafael Nadal are the so-called Big Four and they dominate men’s tennis. They have won more than $400 million between them, have almost 300 career titles and have combined win rate of 81.5%.

It is safe to say that these four players are the bookmakers’ odds on favorites to win every tournament they compete in. Some online sports books offer tournament betting odds without the Big Four as part of the bet. This can be a good bet to make if the odds are long enough because the Big Four do tend to win everything!

Betting on tennis futures is a simple task and one bet type that is popular with tennis bettors. Sports betting sites will almost always offer odds on the outright winner of a major tournament, with some bookmakers spreading odds on some of the lesser known tennis tournaments.

As mentioned earlier, the Big Four dominate all tennis markets in the men’s game so do not expect good betting odds here. Instead, try look for some value outside of the Big Four.

Court surface plays a major role in tennis futures betting because some players excel on one surface but tend to struggle on others. For example, there is nobody in the world as good as Rafael Nadal on a clay court while Roger Federer is arguably the best grass court player in the open era.

The draw for tournaments often takes place in advance of the betting odds being published so study the possible routes players can take to the final and adjust your strategy accordingly, especially if any of the Big Four must play each other before the final or have some tough games from the Round of 16.

Perhaps the most popular tennis betting is on individual matches, albeit without the Big Four, because there are so many matches taking place during a typical tournament.

Many matches during tournaments are evenly matches so the match betting odds will be close together. However, as the draw can pit the elite players against the lesser players, you can often find huge long, or short, odds to bet on.

Betting on the sets of a tennis match is another way to make money from betting on tennis. Online sports betting sites will often handicap a player by giving them a set deficit that they must make up in order to win the bet.

Another set-based tennis bet is how a player will win the game, be it 3-0 or 2-1. Some will also offer betting odds on how many games a player will win in a specific set. This last bet is particularly useful if one of the Big Four is playing a lesser known player because they will often win 6-0 or 6-1, something that is rare in the latter stages, and this will often have longer odds.

View All Sports Betting Sites
Related articles
Betting Picks - 26/08/19
US Open 2019: Serena Takes Aim At Record
With 23 Grand Slam titles, Serena Williams is one shy of tying Margaret Court's record for the most won by a female tennis player. A victory at the US Open would move Williams into a tie. Although she's captured a record-tying six titles there during the open era of the tournament, Williams hasn't won the US Open since 2014. She lost last year's final to Japan's Naomi Osaka 6-2, 6-4.
Read this article
Betting Picks - 11/07/19
Wimbledon: Big Three Dominating Again
Over its history, Wimbledon has witnessed many players dominate centre court. Rod Laver in the 1960s, Bjorn Borg in the 1970s, Boris Becker in the 1980s and Pete Sampras in the 1990s all took their turns as kings of the All-England Lawn Tennis Club.

But the tournament has seen nothing like what's unfolded in men's singles over the past generation. Roger Federer, Novak Djokovic and Rafael Nadal have combined to win 14 of the last 16 men's singles titles.
Read this article
Betting Picks - 20/05/19
French Open Odds: Nadal Seeks Record 12th Title
The story of the French Open is Rafael Nadal. The Spanish star is a clay-court legend. He owns a record 81 straight match wins on clay and 57 clay-court titles during his career, a tennis mark for tournament wins on a single surface. Included in that total are a record 11 French Open men's singles titles. Nadal has won the last two French Opens and is 11-0 in men's singles final matches at Roland-Garros.
Read this article
Betting Picks - 10/12/18
Predicting 2019 Men & Women Australian Open Winners

The Australian Open will be here sooner than you think. Ahead of the January tournament — the first Grand Slam event of 2019 — we look at the betting futures field for both the men's and women's competition! Here are the players most likely to cash in a futures wager for you in a few short weeks in Melbourne!
Read this article
Betting Picks - 13/11/18
2018 Davis Cup Final Betting Odds

France. Croatia. It all comes down to this. The 2018 Davis Cup Final will take place between November 23 and 25, with France looking to win their second straight title. Will they pull up their championship defense? Or is Croatia now a threat to be taken seriously? We're going to break it all down for you here.
Read this article