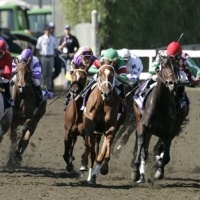 The Breeders Cup current Juvenile Fillies odds are available at a wide range of online bookmakers for players residing in the US.

With a full day of Breeders’ Cup racing action in front of you, making a winning Breeders’ Cup Juvenile Fillies pick can set you up for a lucrative Saturday at the Breeders’ Cup. Making that pick with one of these recommended racebooks is the easiest way to get into the action.

As with any race involving relatively inexperienced two-year-old horses, the BC Juvenile Fillies can be very unpredictable at times, and in fact it's the only race in the history of the Breeders' Cup where there have been two disqualifications of the race winner for causing interference.

At the same time, that unpredictability can lead to some longshot winners and big payouts, and a good Breeders' Cup Juvenile Fillies betting tip is to be prepared to take a flyer on some of the higher-priced runners in the race.

While the race favorite has in fact won the BC Juvenile Fillies 18 times in the 33 years the race has been in the BC schedule, there have also been eight winners who were in double digits on the odds board, with six of those listed at more than 20-1.

Taking a look at the past performance information for these horses prior to their Breeders' Cup Juvenile win shows that in all three cases, while they were competing in stakes and graded-stakes level races, their results were mediocre at best (thus, they went off at such high odds in the Juvenile Fillies).

In all three of these cases, their previous racing lines indicate, as can be expected with young horses, they ran "green" - that is, they either didn't settle well into the race, found themselves boxed in by other horses, or had to overcome some kind of interference in the races.

What changed in the Breeders' Cup Juvenile Fillies was that all three of these horses broke from the middle of the gate, got a good position early, and avoided any trouble that developed in the race behind them.

Look For Horses Who Break Quickly

So what this means from a handicapping perspective is to look for horses that can break quickly from the gate and be in contention in the first quarter or half-mile in fractions under 24 seconds, and if there is a question between a couple horses on which to bet, gate position could be a deciding factor.

An Excellent Race To Bet On

As mentioned above, the Juvenile Fillies kicks off the Saturday Breeders' Cup card of nine races, and a decent payout on the race can set you up to be playing with house money for the rest of the card.

Use some of the longshots on the multiple-race bets such as Pick 3s and 4s. Of course, there is lots of racing action still to come after the Juvenile Fillies, so you don't want to blow your entire bankroll on the very first race. But given the historical data, the BC Juvenile Fillies is clearly one of the best races on Breeders' Cup weekend to try and hit a handicapping home run.