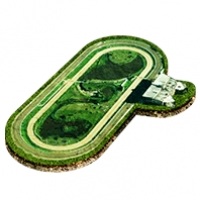 Gulfstream Park opened in 1939 and has since grown into the winter mecca of Thoroughbred horse racing in Florida. Located in Hallandale Beach, the track has a distinctive Miami flair and operates for live racing from December through October each year. With practically year-round racing, there is a strong local horsemen population and the track also attracts some of the premier trainers, jockeys and horses in the country. [+]

Gulfstream Park has a mile and an eighth main track that also has a one-mile back stretch chute. The turf course is one mile and has a portable rail which can be moved as needed to keep the course in good shape. One of the main features at Gulfstream Park is Pegasus Park which was developed in 2013 – it is a 110 foot bronze statue of Pegasus killing a dragon and it has the distinction of being the second largest statue in the United States behind only the Statue of Liberty.

Even if you cannot make it to Hallandale Beach in Florida to watch and wager on the races at Gulfstream Park, you can get in on all of the exciting Thoroughbred horse racing action through one of these recommended racebooks as well as get free selections to help make your handicapping even easier!

There are a couple of key factors that can help make wagering on the races at Gulfstream Park a successful venture. The main track can be speed-favoring, particularly if there is any rain and the main track is sealed. Front-runners can get loose on the lead and then be impossible to reel in.

Another thing to watch for, particularly in the early winter months and through the spring, is young stock coming out for top barns. Trainers like Todd Pletcher have an overflow of promising young horses and many of the newly-turned three-year-olds will make their debut early in the meet to see if they have the potential to be factors in the Kentucky Derby prep races.

Gulfstream Park underwent a major renovation in 2004 and the new developments, including the addition of expanded casino gaming, were unveiled in 2006. Prior to these changes to the grandstand and structure of the track, Gulfstream had been the host of several Breeders’ Cup events, most recent in 1999. The Breeders’ Cup has not returned to Hallandale Beach since then.

There are major stakes races throughout the Gulfstream Park racing season with serious implications on multiple divisions.

The Florida Derby is one of the most important prep races for the Kentucky Derby and is traditionally held towards the end of March or early April. The Grade 1 event offers a purse of $1 million and is contested at a mile and an eighth.

In the past twenty years, the Florida Derby has had five winners go on to win the Kentucky Derby – Monarchos (2001), Barbaro (2006), Big Brown (2008), Orb (2013) and Nyquist (2016). Trainers John Veitch, Nick Zito and Todd Pletcher have all saddled three winners and both Zito and Pletcher are still actively training.

The Gulfstream Park Turf Handicap is a Grade 1 race for four year olds and upward and is run in early February at a mile and an eighth on the turf. The purse is currently $350,000 and the race is timed in such a way that it often attracts some of the best horses in the country returning off of winter layoffs after the Breeders’ Cup.

After a long and impressive history, the Donn Handicap was replaced by the Pegasus World Cup for 2017. The Donn Handicap was inaugurated in 1959 and over the years was a showcase for some of the greatest champions in horse racing history including Forego (1974), Cigar (1995, 1996) and Skip Away (1998).

The Pegasus World Cup has replaced the Donn Handicap on the stakes schedule and has taken over the Grade 1 status. The new race will have a world record purse of $12 million.

Gulfstream Park is also home to the Sunshine Millions Series, a set of races designed to showcase the Florida breeding program. When the series began, it included both California and Florida-bred horses and alternated locations between Gulfstream Park and Santa Anita. Now, the race has evolved to be exclusively for Florida-bred racehorses and is held in January at Gulfstream Park.