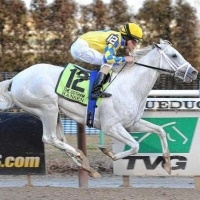 Run at 1 1/16 miles on the dirt course at Aqueduct Race Track in Queens, New York, the (G3) Gotham Stakes carries a total purse of $300,000 and is open to three-year-old horses. First run in 1953, the Gotham has long been used as the local prep race for the $1 million (G1) Wood Memorial Stakes, and since 2013 has been included in the Kentucky Derby points series, where the top four finishers are awarded points toward a starting spot inthe Derby. The Gotham is typically run in late February or early March.

You can get morning line track odds, access to multiple wager types, and up-to-the-minute Gotham Stakes results when you open an account and place your race wagers with one of theses highly recommended online racebooks.

Like the Kentucky Derby prep race that preceeds it, the 1 mile and 70 yard Jerome Stakes, the Gotham is run on the inner dirt track at Aqueduct, meaning the horses must negotiate fairly tight corners as they make their way around the two turns required for the race distance.

However, due to the fact the Gotham is slightly longer than the Jerome, it's not quite as important for horses to be in a forward position early in the race, as they have a bit more room to make up distance from a slow start.

In a couple of cases in the last five races, the eventual winner was multiple lengths off the lead - or, in some instances, near the back of the field - in the early part of the race and still managed to get up in time to take the win.

This is in contrast to the Jerome, where four of the past five winners were on or near the lead from the very start of the race. This being the case, you can expand your handicapping in the Gotham to include horses that come from off the pace as well as frontrunners.

Of the past five winners, four had at least one start over the Aqueduct inner dirt track prior to running in the Gotham Stakes, with three winners and a second-place finish among those.

Having familiarity running over the Aqueduct innner dirt surface (specially designed to hold up to the weather for winter racing) provides some advantage to horses runnig in the Gotham and those horses should be considered heavily when handicapping the race.

As for what can be expected for payouts, also like the Jerome Stakes, the Gotham has been something of a favorites' race in the recent past, with four of the past five winners being the tote board favorite when the gates opened.

In the other case, Vyjack in 2013, was the seond favorite prior to the race. Unless you are willing to make a large, single bet on the favorite (a completely acceptable betting strategy for lots of people), you'll want to look for other ways to bet the Gotham to get a bigger return on your investment.

One way to do this is to concentrate on exotic bets, and particularly the exacta bet. Over the past five years, the Gotham runner-up has done so at an average of 14-1.

Barring 2013, where the exacta payout was a juicy $223 when 34-1 longshot West Hills Giant ran second, the exacta has averaged a very respectable $32 on a $2 bet in the other four recent races.

Another way to take advantage of the propensity for favorites to win the Gotham is to use the race in multiple-race bets such as rolling Daily Doubles, Pick 3s and Pick 4s.

It's much easier (and economical) to fill out these kinds of tickets when you think one race in the series has a high chance of going to the favorite. You can then include only the top two favorites for the Gotham on the ticket and have more of your wagering budget to spread around on the other races where the probable winner is not so obvious.