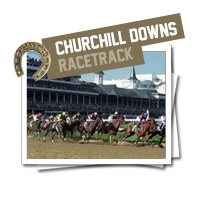 Even if you cannot make it to Churchill Downs to see the legendary twin spires in person, you don’t have to miss a second of the action through one of these recommended racebooks. You can get entries, results and some promotions, incentives and bonuses not available anywhere else all from the convenience of your computer or mobile device.

Betting the races at Churchill Downs can be a daunting task. In addition to the Kentucky Derby and Kentucky Oaks, the track has hosted the Breeders’ Cup on eight occasions, most recently in 2011. There is no shortage of top class horses, jockeys and trainers at Churchill Downs and picking a winner from such a deep talent pool can be a challenge.

About The Dirt Track

Churchill Downs has a one-mile dirt track. Inside that is a seven furlong turf course. For the most part, both the dirt and the turf course play very fair though one thing to keep in mind when handicapping the races at Churchill Downs is that some horses do not care for the dirt track while others show a particular affinity for it.

It is important to pay close attention to past performances and make special note if a horse has performed unusually well or poorly at Churchill Downs in the past. Even some of the greatest horses in contemporary history like Hall of Fame champion Skip Away simply did not perform well at Churchill Downs.

How The Rail Is Playing

It is also important to keep an eye on how the rail is playing. Jockey Calvin Borel earned the nickname “Bo-Rail” for having a particular knack for being able to take advantage of a track bias on the rail and capitalize on that. One of his biggest rail-skimming scores came aboard huge longshot Mine That Bird in the 2009 Kentucky Derby. He also won the Run for the Roses in 2007 with Street Sense.

Churchill Downs is home to some of the most prestigious graded stakes races in the country. There are three separate racing seasons held over the course of the year – there is a spring meet, a fall meet and a recently added brief racing meet held in September.

The Kentucky Derby is one of the most famous sporting events in the world. It is held on the first Saturday in May every year and is restricted to three-year-olds. The mile and a quarter contest is the first jewel of horse racing’s most coveted prize – the Triple Crown.

The stakes and track record for a mile and a quarter was set in1973 by the immortal Secretariat – he stopped the clock in 1:59.40 and that record has not been in jeopardy since then.

The Clark Handicap is the highlight of the fall racing meet at Churchill Downs. The Grade 1 event for older horses has a purse of $500,000 and is run at the distance of a mile and an eighth. It has identical conditions to the spring meet’s premier race for older horses, the Stephen Foster Handicap.

The Clark is held typically at the end of November or in early December. Because it is held after the Breeders’ Cup, it can serve as a final chance for an older horse to add another Grade 1 to their resume and make a case for the Champion Older Male Eclipse Award or for a three-year-old to step up and defeat older horses as was the case with Gun Runner (2016) and Will Take Charge (2013).

One of the most noteworthy horses to win the Clark Handicap in recent years was Wise Dan who was best known for being a two-time Breeders’ Cup mile champion.

The Turf Classic Stakes features some of the top turf horses in the country and is held as part of the spring racing meet in early May. The Grade 1 race has a purse of $500,000 and is run at a mile and an eighth on the lawn. It is currently sponsored by Woodford Reserve.

Many top horses have won the Turf Classic including Breeders’ Cup Mile champions Lure and Wise Dan. Lure holds the stakes record of 1:46.34.