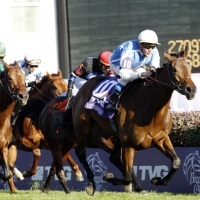 The Breeders Cup current Mile odds have been collected from the best bookmakers available to US players.

You can get Breeders’ Cup Mile betting track odds, results and fast payouts with cash back and other bonuses when you open an account and make your Breeders’ Cup wagers with one of these top-rated online racebooks.

More than any other Breeders' Cup race, the BC Mile has been dominated by numerous horses over the history of the race, making looking at past results a bit more difficult when trying to suss out Breeders' Cup Mile betting tips.

In fact, the favorite has won a majority of the runnings of the BC Mile, but those numbers include the two wins by Wise Dan and the three wins by Goldikova. Both of these horses at the time of their Breeders' Cup victories were simply running at another level than their competiton.

Wise Dan, for example, had won seven of his previous eight races before winning the 2010 Mile, and in the other race he ran second. He then won five of six prior to winning his second BC Mile, again with one second, which came in a race that was moved off the turf onto the dirt.

Goldikova, meanwhile, was simply one of the best of her generation, and captured her three Breeders' Cup Mile titles during a stretch when she won 14 of 17 races, most of those being Group 1 events in the UK and France.

Without those two in the mix, the Mile has actully produced some big longshot winners in the past 10 years, and if you eliminate the five years dominated by Wise Dan and Goldikova, the other five races since 2007 have produced average winning odds of 25-1, which includes victories by 30-1 Karakontie (the only Japan-bred horse to win a BC race so far) in 2014, and 65-1 Court Vision in 2010, a race that saw Goldikova finish third in her fourth and final race at the Breeders' Cup.

On balance, then, the BC Mile comes off historically as a kind of feast-or-famine race from a payoff perspective on the winner, and another race on the Breeders' Cup card that seems to set up well for exacta and trifecta betting, with the favorite mixed in with a couple longer-priced horses on betting tickets.

American-Bred Horses Holding Their Own

Unlike the other major grass race at the Breeders' Cup, the 1 1/2 mile Turf, which has been dominated over the years by European-based runners, American-breds have historically held their own in the BC Mile, winning a much higher percentage of the races than their overseas competition, with 20 wins in 33 races.

While horses bred and raced outside of the US have swept the top three placings of the BC Turf seven times, they've only done so three times in an equal number of races in the BC Mile, while American-breds have done so eight times.

It should be noted that, horses shipping in from overseas have collected nearly half of the top-three spots, with Irish-breds winning seven times, French horses collecting three wins, UK breds two, along with a lone Japanese winner.

So while American horses have done well in the Mile, it's always wise to give consideration to the top overseas contenders when putting together a betting ticket for the BC Mile.