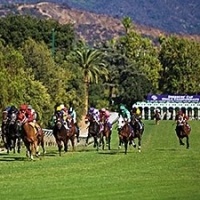 Santa Anita Racetrack (aka Santa Anita Park) is located in Arcadia, California and began holding racing at its present location in 1934. Often referred to as “The Great Race Place” the track boasts a one-mile dirt track and a seven-furlong inner turf course, as well as a unique downhill turf course with a slight right-hand bend of 6 1/2 furlongs for sprint races on the turf. Santa Anita holds a live race meet from late December until early July, as well as a short Fall meet from late September to the first week of November.

In this guide we will cover both offtrack betting for Santa Anita and betting at the Santa Anita track.

Whether you are planning a trip to Santa Anita, heading out to an off track betting facility, or placing your wagers through one of the recommended online racebooks listed below, consult the track webpage first to find out about Santa Anita Racetrack entries for that day.

As one of the premier thoroughbred racing facilities in North America, Santa Anita hosts more than 80 graded-stakes races during the year, with 20 of these being Grade 1 events. These races involve some of the top horses racing in North America and often attract the best runners from overseas as well. In addition, Santa Anita is well known in the international racing community for having been the nine-time host of the Breeders' Cup World Championships. This wealth of world-calibre racing makes Santa Anita a handicapping favorite. Here's a look at a few of the races from Santa Anita that should be on every racing fan's calendar.

The Grade 1 Santa Anita Derby is the original "big race" at the track, having first been run in 1935, and is today considered the major West coast prep race for horses looking to race in the Kentucky Derby. With a total purse of $1 million, the SA Derby is open to horses aged three, and is run at 1 1/8 miles on the dirt course. The next Santa Anita Derby is set to go on April 8, 2017.

Also known as "The Big 'Cap", the Santa Anita Handicap also dates back to 1935. For horses aged four and up, the race is run at 1 1/4 miles on the dirt, and offers a purse of $750,000, making it one of the richest races for older horses in North America. The race is often associated with the legendary Seabiscuit, as the horse tried three times to win it, losing both of his first two attempts in a photo finish in 1937 and '38, missing in 1939 due to an injury, and finally winning in 1940 in the final race of his career. The SA Handicap takes place on March 11, 2017.

The female counterpart to the SA Derby (although that race is officially open to fillies as well as colts) the Santa Anita Oaks is considered a major prep for West coast fillies prior to the running of the Kentucky Oaks. With a purse of $400,000, the race is run at 1 1/16 miles on the dirt course. Originally run in 1935 as the Santa Susana Stakes, name was changed to the Oaks in 1986. The race goes on the same day as the SA Derby, April 8, 2017.

A race for older sprinters, the $400,000 Triple Bend Stakes is one of several races that Santa Anita carried over from Hollywood Park after that racetrack closed in 2014. Open to horses aged four and older, the race is run at the distance of 7 furlongs on the dirt course. Originally called the Lakes and Flowers Handicap when first run in 1952, the name was changed in honor of the horse Triple Bend, who set a then-world record time for running 7 furlongs in the 1972 Los Angeles Handicap at Hollywood Park. This year's Triple Bend will be run on March 11, 2017.

Carrying a rather un-wieldy name, this race is another carry over from Hollywood Park, where it was simply known as the Hollywood Gold Cup when it was launched in 1938. Open to horses aged three and older, the race is run at 1 1/4 miles and carries a total purse of $500,000. Typically run in late June, it is these days most significant as part of the Breeders' Cup Challenge series, with the winner gaining an automatic berth into the Breeders' Cup Classic.

With the winner often considered a leading contender for the following year's Kentucky Derby, the Frontrunner is open to horses aged two, and is run at 1 1/16 miles on the Santa Anita Dirt course, with a purse of $300,000. Held in late September, in addition to being part of the Kentucky Derby Challenge series, it is also a "Win and You're In" event for the Breeders' Cup Juvenile.

One of the few Grade 1 turf races for females in North America, the American Oaks is a relatively new race, first run in 2002 at Hollywood Park. Since moving to Santa Anita, the race has been held in late June, early July, and for 2016, on New Year's Eve Day. Open to three-year-old fillies racing  1 1/4 miles, the race has a current purse of $300,000.

Also run on the turf, the Frank Kilroe Mile is the major turf race at Santa Anita, and is open to horses aged four and older, with a current purse of $400,000. First run in 1960 as the Arcadia Handicap, the name was changed to honor the longtime head of the California Board of Racing. The race is scheduled to be run on March 11, 2017.