How To Bet On Vancouver Canucks 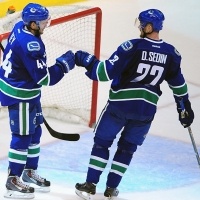 The Canucks are a far-cry from the team that made it to the Stanley Cup in 2011 but are still, for the time being, led by the Sedin twins. Two dynamic veterans, tethered to one another’s thoughts, are always enough to help the team stay within striking range of a playoff spot. But the seas would have to part for the Canucks to win it all. The Western Conference is absolutely stacked which make the odds of Vancouver qualifying for the playoffs pretty slim. History tends to indicate that the Canucks go as the Sedin’s do.

The Vancouver Canucks next game is a good way to see how the two teams match up. Check out both teams’ recent statistics to decipher the most reasonable outcome.

My Team's Next MatchVancouver Canucks

The Vancouver Canucks regular season schedule will help you get a better idea of when the team is heading into periods of duress. It may be smarter to let them sort it out before putting your money on the line. Even better, bet on the Canuck’s opposition.

The Canucks standings are painting a bleak picture for their playoff hopes but keep an eye on the playoff bubble as teams have a way of unexpectedly making their way into the dance.

While other teams with nearly identical records are elevating their performance level, Vancouver are exiting at the lobby as they have clearly seen better days. The Sedin twins are getting a little long in the tooth and carrying a team 82 games, and through four rounds of the playoffs, is an increasingly tall task.

With a bit of retooling maybe they can find a way to right the ship, but as of now Vancouver is on their down and looking very pedestrian in the process.

So you should definitely avoid future bets until this westcoast team starts showing considerable improvement. And you might have to a wait a while for that to happen. Bo Horvat is the new leader of the Canucks, as the 21-year-old has already showed his versatile skill set. But the Canucks don't have enough depth up front or at the back to content for the playoffs anytime soon.

Ryan Miller is 36 years old and won't be able to maintain his position as the team's top goalie for much longer.

If you're intent on finding the best value Canucks bets, take a look at how they're faring over a 10-game span. Even the Canucks are bound to go on a hot streak of sorts, or, alternatively, an extended losing streak. These are the opportune moments to get involved on betting either for, or against, Vancouver.