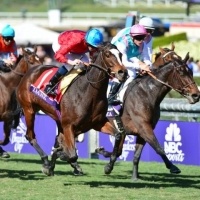 The Breeders Cup current Filly Mare Turf odds have been gathered by the best bookmakers available to US players.

Once you have studied the form charts and made your Breeders’ Cup Filly & Mare Turf predictions, you can bet the race at the track, at an off-track betting facility, or in the comfort of your home by opening an account with one of these top-rated online racebooks.

Much like the Breeders' Cup Turf, the Fillies & Mare Turf has been a race where European-bred-and-raced horses have done very well, although perhaps not to the extent they previously dominated. Since the race was launched in 1999, Euros have won 11 of the 18 races, and non-American horses have swept the top three placings four times, while American breds have never swept the top three.

European runners were more dominant in the early days of the race, but things have evened out more recently, with the winners split 5-5 over the past 10 years. In fact, of the 30 top three placing available in the past 10 races, non-American breds have claimed 17, which is an important factor when handicapping the race, particularly when filling out exacta and trifecta tickets.

It's interesting to note that, while Irish-bred horses have had great success on the turf at the Breeders' Cup, it is actually UK-bred fillies and mares that have been more dominant in the Filly & Mare Turf than their cousins from the Emerald Isle, with UK breds winning eight of those 11 races, French horses taking two, and Irish breds just one.

When it comes to payouts, a look back at the results finds the Filly & Mare Turf has been a very good betting race, and finding the winner has proven to be fairly lucrative.

Over the past 10 races, the average payout on the winner has been just around 13-1 and only twice in that span has the winner paid less than 5-1, with only one of those being the favorite.

That horse was Dank. In 2013, she had come into the race having won three of her previous four starts, including the Grade 1 Beverly D. Stakes in her first start on US soil. As the clear favorite she only managed to win by 1/2 length in a race where the top seven finishers were seperated by less than four lengths.

Although the favorite has only won one of the last 10 versions of the Filly & Mare Turf, the results also show they shouldn't be disregarded altogether when handicapping the race and making exacta and trifecta bets, as over that time the favorite has also managed to finish second three times, and third three times as well.

Speaking of those exotics, as can be imagined given the average payout on the winners, the exactas and especially the trifectas have paid very well in the Filly & Mare Turf, with multiple trifecta payouts in the $1000 to $2000 range on a $2 wager.

As mentioned elsewhere on Be A Better Bettor, the key to making a sensible trifecta bet is to whittle the field down to 5-6 possible in-the-money horses, and then manage your bankroll accordingly to cover those horses in the most logical outcome.

One wagering strategy for trifectas is to put one or two horses in the top three spots (bet them "across the board"), and the other three or four in the Place and Show positions on your ticket.

Although it requires more in-depth handicapping to narrow the top five or six down to the two most likely to win (perhaps the favorite and one other), this is typically better money management than to simply box all five or six horses in all positions.