How to Bet on UFC? 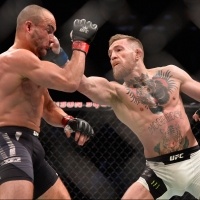 The powerful allure of sports is that anything can and will happen. However, no sporting organization epitomizes this more than Ultimate Fighting Championship.

Inside the steel-caged octagon ring, one perfectly-timed kick or punch is all the difference between a win and a loss. The UFC's history is dotted with these have-to-see-to-believe moments, such as Connor McGregor's 13-second victory over Jose Aldo or Matt Sera's upset knockout of Georges St-Pierre. With the UFC, you're really seconds away from witnessing history at any given moment.

This unpredictability has led to UFC's incredible rise since the turn of the century. The company was bought by north of $4 billion dollars by WME-IMG in 2016 — an incredible twist of fate considering American politicians were trying to shut the promotion down for "human cockfighting" just two decades before.

Today, UFC is permeating every corner of the globe. Fight cards have spawned past the usual Las Vegas destination and into Chile, Australia, England, and many other countries. The roster is littered with international-born stars, including McGregor (Ireland), Khabib Nurmagomedov (Russia), and Cris Cyborg (Brazil).

All these factors make the UFC a must in your betting arsenal. This page is your one-stop shop for all wagering needs. Keep scrolling and you'll find the best UFC odds and our sure-fire ways to win at the sport.

Wagering opportunities are plentiful in the UFC. The promotion hosts pay-per-views — the events that are numbered, such as UFC 229 for example — on a monthly basis. Top stars almost fight exclusively on PPV, which typically has five main card matches (along with a slew of undercard bouts). When there's not a PPV, there's UFC Fight Night. These weekend events are much more common but don't feature the same caliber of fighters.

Between Fight Nights and PPV's, you can almost guarantee there'll be multiple UFC fights to bet on each Saturday. This wealth of opportunities is every bettor's dream.

Below you'll find up-to-the-minute odds for upcoming UFC fights. These lines will ebb and flow as the fight approaches so pay close attention.

There are two ways you can wager on a given fight — moneyline and over/under.

The former is the standard pick-who-wins bet you find in every other sport. Unless the fight is a real toss-up, these odds are pretty unbalanced. Of course, this plays to your favor if you bet on the underdog, but no one's ever gotten rich off sports betting by regularly betting the underdog. Key word: regularly. Pick your battles wisely if you're riding with the underdog.

Instead of wagering on total points scored like other sports, over/unders in UFC are reserved for how many rounds the fight will last. Almost always, over/unders are fixed exactly at the half-way point of a bout. So if it's a five-round championship fight, the total is placed at 2.5 rounds. For regular three-round fights, this over/under dips to 1.5

Here's where things get tricky: time is very much a factor on over/unders. For example, what if a fight ends in the second round and you have the under 1.5? If the victory was before the 2:29 mark, the under hits, while 2:31 and above signals an over. Talk about every second counting...

Mixed martial arts is made up of a slew of fighting styles — boxing, jiu-jitsu, muay thai, wrestling, among others. This mish-mash of disciplines is what initially birthed the UFC in 1993 as promoters set out to see which style would triumph over the other.

After more than 25 years, it's safe to say, no one style is king. Instead, each style has their individual pros and cons. As a bettor, it's of the utmost importance to understand each.

Take a stand-up specialist for example. They might be deadly with their hands and feet while standing, however, they're typically more vulnerable on the ground. A fighter with a wrestling background could exploit the stand-up fighter with takedowns.

Having a strong grasp of in-ring styles also pays dividends when making high-pay-off prop bets, such as exact outcome of a fight (decision, knockout, submission). A jiu jitsi specialist wins fights via submission more often than knockout, while a fighter with excellent ground game typically goes the distance.

The sport has evolved to the point where top-level fighters like Daniel Cormier or Khabib can mix and match different styles, but they still have strengths and weaknesses in each discipline. If your research finds an opponent happens to excel at their weakness, you have yourself a mismatch — and those decide fights more than anything else.

We mentioned it earlier, but it's worth repeating: the UFC is the most unpredictable sport around. So even if you do your homework and find a mismatch, you just never quite know when one punch will throw all that out of the window.