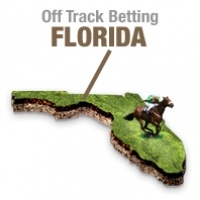 The horse racing industry in Florida has developed into one of the most lucrative and booming in the United States. With no shortage of sunshine, many of the top trainers and jockeys migrate south each winter to compete at tracks throughout the Sunshine State and that makes for some of the most competitive events for horse racing enthusiasts to watch and wager on. In addition to a thriving horse racing product, Florida has also grown to have one of the strongest breeding programs in the country.

Even if you cannot make it to Gulfstream Park, Tampa Bay Downs or one of Florida’s other premier racetracks, you can still get in on all of the wagering action through an off-track-betting location like the ones reviewed here. It is the next best thing to being there in person!

Horse racing has been a part of the landscape in Florida for decades and the state has been the location of some of the greatest moments in horse racing history. With key prep races for the Kentucky Derby held in Florida as well as the former site of some memorable Breeders’ Cup races, the action in the Sunshine State cannot be missed.

In the winter, some of the most important races to watch at Florida race tracks are the nondescript maiden races early in the year. While these lack some of the prestige and purses of the major stakes races, it is in Florida in January or February that some of the most talented three-year-olds make their debut and you could be seeing a future star before they make it big.

Gulfstream Park held their first race in 1939 and since then has developed into a true powerhouse in the horse racing industry. The main dirt track is a mile and an eighth and the turf course is one mile. The track, with the advent of casino gaming, underwent a major renovation in the early 2000s and is one of the most modern facilities in the country. Gulfstream Park is currently owned and operated by the Stronach Group.

One of the most notable features is the Pegasus statue which depicts a Pegasus fighting a dragon. The extraordinary sculpture cost in excess of $30 million and is the second largest statue in the United States behind only the Statue of Liberty.

There are many major racing events held every year at Gulfstream Park including the Florida Derby, the Holy Bull Stakes and, for the first time in 2017, the $12 million Pegasus World Cup which will replace the prestigious and historic Donn Handicap on the stakes schedule.

Tampa Bay Downs has one of the oldest and richest histories of the actively operating tracks in Florida and while it has undergone several name changes over the years, the “Oldsmar Oval” has been a mainstay and has developed a reputation in recent years for having big fields, competitive racing and a low-takeout.

The main track is a standard one-mile oval and inside that there is a seven furlong turf course with a quarter mile turf chute. The main track is one of the most fair surfaces in the country and horseplayers are hard pressed to find a specific bias on a regular basis. The turf course is a recent addition and was added in only in 1998. Since then, the turf course has drawn rave reviews for its safety and consistency and draws some of the finest turf trainers in the country such as Bill Mott, Christophe Clement and Graham Motion to compete their finest young turf horses.

Gulfstream Park West is the track formerly known as Calder Race Course. In 1971, Calder Race Course opened and became one of the top horse racing destinations in Florida. After a gradual decline in racing quality in the more recent years, the Stronach Group began to lease the track from Churchill Downs Incorporated and renamed it Gulfstream Park West.

Gulfstream Park West has a one mile main track and a seven furlong turf course with a quarter mile chute.  The track operates a small boutique meet in the fall known as the Fall Turf Festival which features some of the better racing now relegated to Gulfstream Park West including the Tropical Turf Handicap, My Charmer Handicap and the Pulpit Stakes.

In addition, Gulfstream Park West has held Sunshine Millions Preview Day which features eight races, including the $100,000 Sunshine Millions Classic Preview. This day serves as a precursor to the lucrative and popular Sunshine Millions and offers local horses the opportunity to get a prep race in before the big day.