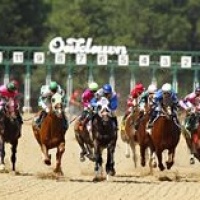 As the signature race of the Oaklawn Park Winter-Spring race meet, the Grade 1 Arkansas Derby is also considered one of the final major prep races for the Kentucky Derby. Held every year in mid-April, the Arkansas Derby is open to horses aged three, and is run on the Oaklawn dirt track at a distance of 1 1/8 miles. It currently carries an overall purse of $1 million, and as part of the Kentucky Derby Challenge series awards the top four finishers with points toward a starting spot in the Derby gate the first Staurday of May.

If you think you’ve picked the Arkansas Derby winner but can’t get to the track to make your bet, you can always wager and win with an account at one of these top-rated online racebooks and get track odds, quick payouts and bonuses on your first deposit.

When Is The Arkansas Derby?

The Arkansas Derby traditionally closes the Oaklawn Park race meet, and for 2017 the race is set to be run on Saturday, April 15, the last of three graded-stakes races scheduled for that day, including the (G2) Oaklawn Handicap and the (G3) Count Fleet Sprint Handicap. On the day before, Oaklawn also hosts the (G3) Fanatasy Stakes and the (G1) Apple Blossom Handicap.

Coming less than a month before the running of the Kentucky Derby, the results of the Arkansas should be taken into consideration when handicapping the Triple Crown races. In the past few years, 2016 winner Creator would later take the Belmont Stakes, and in 2015 American Pharoah would win the Arkansas and then, of course, go on to sweep the Triple Crown, the first horse to do so in 37 years. The 2012 Arkansas Derby winner, Bodemeister, went on to run second in both the Kentucky Derby and Preakness Stakes.

Prior to the triumphs of American Pharoah, Curlin was perhaps the most decorated recent Arkansas Derby winner. After winning both the Rebel Stakes and the Arkansas at Oaklawn Park in 2007, he would run third in the Kentucky Derby, win the Preakness Stakes and run second in the Belmont Stakes, before winning the Breeders' Cup Classic. In 2008 he won the Dubai World Cup and three other Grade 1 races, and he was named American Horse of the Year for both 2007 and 2008. When retired after the 2008 season, he held the world record (since surpassed by California Chrome) for lifetime earnings at more than $10.5 million.

And then there is Smarty Jones, perhaps the most popular winner of the Arkansas Derby in the past 20 years. In 2004, to mark the 100th anniversary of Oaklawn, the track offered a $5 million bonus to any horse that could sweep the Southwest Stakes, the Rebel Stakes and the Arkansas Derby, and then go on to win the Kentucky Derby.

As a Pennsylvania-bred colt, trained by the relatively unknown John Servis and ridden by journeyman jockey Stewart Elliot, Smarty Jones seemed an unlikely candidate, even though he went into the Southwest having won the first three races of his career. But he won all three of the Oaklawn races in similar style, stalking the leader and then pulling away in the stretch, won the Kentucky Derby to collect the $5 million bonus, won the Preakness Stakes and then finished a heart-breaking second in the Belmont Stakes, falling just short of becoming a Triple Crown champion.

In honor of his accomplishments, in 2008 Oaklawn Park launched the inaugural Smarty Jones Stakes, a one-mile test for three-year-old horses, run on Oaklawn's opening weekend in mid-January, and currently carrying a purse of $150,000.