How To Bet On Milwaukee Bucks 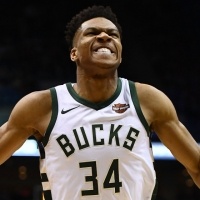 It used to be that the Milwaukee Bucks toed the line between NBA irrelevance and being underdogs. Not anymore. Fueled by the rise of Giannis Antetokounmpo, now a top-five player, the Bucks are among the toast of the league.

We do not say this lightly. It takes a lot to be considered a quasi-powerhouse in the current era, even if a team plays in the wide-open Eastern Conference. The Bucks are checking all the necessary boxes.

Hiring head coach Mike Budenholzer has opened up their offense and injected discipline into their defense. Khris Middleton is blossoming into an All-Star beside Antetokounmpo. The front office finally acquired some frontcourt shooting with the additions of Ersan Ilyasova and Brook Lopez. Eric Bledsoe is playing All-NBA defense again.

Everything’s coming together in Milwaukee just in time for an NBA Finals push, and it’s time bettors take note.

Come back here whenever you’re looking to check out the Bucks’ next opponents. Lines for this game may not always be available—though they will be the day of the matchup—but you can begin to take stock of how Milwaukee stacks up against its latest foe.

My Team's Next MatchMilwaukee Bucks

Use the Bucks’ full-season schedule to make advanced betting plans. Game lines won’t be available weeks prior to tip-off, but you’re not necessarily trying to come up with a specific wager. Rather, you’re trying to identify any opportunistic or problematic blips in the schedule.

Also be wary of prospective rivalry matchups. The NBA has deemphasized the importance of divisions, but Milwaukee is still prone to epic bouts with fellow Central Division members like the Chicago Bulls and Indiana Pacers. As the Bucks have become more relevant, matchups with the Boston Celtics, Toronto Raptors and Philadelphia 76ers are dates to circle on your calendar as well.

Keep tabs on the Bucks’ value in the futures department by tracking their progress in the NBA’s standings. The closer they are to universally accepted contenders like the Celtics, Raptors, Sixers, Golden State Warriors and Houston Rockets, the more championship stock you’ll want to buy in them.

Though this is subject to change, the Bucks are currently not only keeping pace with the NBA’s top guns, but they’re edging out some of them. You’ll still want to get a good price on their championship packages, but as of now, they’re a better bet than more popular investments, such as those made in the Los Angeles Lakers and Rockets.

Use these anecdotal and statistical tips to help you profit off your bets on the Bucks during the 2018-19 season.

Teams that have distinct play styles are a bettor’s best friend. And we’re not just talking about identities on one side of the floor. It’s best when they’re a known commodity on both offense and defense.

Few teams have developed a style quite as steady as the Bucks. They join the Denver Nuggets as the only two teams that rank inside the top seven of both offensive and defensive efficiency per 100 possessions.

That’s a huge deal. This kind of elite balance is typical of championship contention. Beyond that, it helps make the Bucks a solid, if spectacular investment, on a daily basis.

Over/under wagers are something you will want to steer clear of. The Bucks score more points per 100 possessions than any other offense, which is usually conducive to the over, but their stingy defense helps offset that volume. In an age where sportsbooks continue to up the over/under markers, you’ll want to limit your total-score bets for Milwaukee.

Spreads and moneylines are fair game, which is a nod to the Bucks’ dependability. They’re covering almost 60 percent of their games against the spread, and they have the league’s best point differential when playing at home.

Are The Bucks Championship Contenders?

Casual bettors will answer this question with a resounding “no.” The Warriors continue to exist, while both the Celtics, Sixers and Raptors tend to receive more love when looking at the Eastern Conference pecking order.

Don’t let prevailing perception fool you, though. The Bucks are contenders—one of the few teams who could feasibly beat the Warriors four times over the course of a seven-game series.

Indeed, they’re far from perfect. Giannis Antetokounmpo is still shooting under 15 percent (related: yuck) from three-point range, and they’re playing so-so basketball outside Milwaukee. The Bucks’ early stats could also be inflated by a home-heavy schedule. More games on the road may bring them back down to earth.

But they don’t need to have the NBA’s best offense, or the best point differential per 100 possessions. They just need to be in the vicinity of the teams that do. And that shouldn’t be a problem. Teams with a top-10 player, such as Antetokounmpo, are basically guaranteed playoff bids. The depth that the Bucks have finally put around him elevates them a cut above most of their peers.

If anything, the Bucks should be treated as quasi-favorites. They’re not there yet. Sportsbooks have yet to move their championship odds above +2000. That’s a great baseline price if you’re looking for the right amount of return versus the likelihood of success. But don’t wait to place a wager, because Milwaukee’s title-chasing stock is only going to improve.