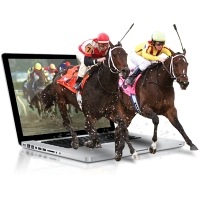 The road to the Kentucky Derby runs through Hallandale Beach, Florida, with a stop at Gulfstream Park for the Holy Bull Stakes. The race is one of the earliest prep races for the Run for the Roses and is held in January. Currently, the mile and a sixteenth contest has a purse of $350,000 and holds Grade 2 status. It was originally known as the Preview Stakes and was held for the first time in 1990. [+]

It was originally intended to fill the void left by the closure of Hialeah Park and with that, the end of the Flamingo Stakes. The race was renamed in 1996 to honor Holy Bull, one of the greatest horses to race in Florida.

As part of the Kentucky Derby points system, the Holy Bull Stakes offers qualifying points broken down to the top four finishers as follows – 10-4-2-1.

Even if you cannot make it to Hallandale Beach in Florida to watch and wager on the Holy Bull Stakes, you don’t have to miss a minute of the top class horse racing through one of these recommended racebooks. You can also get free selections which will make picking the winner of the Holy Bull Stakes even easier!

Betting on the Holy Bull Stakes can be a challenge because the race is so early in the season. Held in January, that can mean that some of the top contenders in the race have only a handful of starts if they were slow developing juveniles and that can leave even the sharpest handicapper not much data to go off of when trying to figure out the race.

One thing to keep in mind when betting on the Holy Bull Stakes is to look at jockeys and trainers who have been successful in recent years. Both Nick Zito and Kiaran McLaughlin have saddled three winners and are both barns to watch in Florida.

Zito sent out Go for Gin to win in 1994 and in doing so, Go For Gin set a stakes record at a mile and a sixteenth of 1:41.62 which still stands. Go For Gin also went on to win the Kentucky Derby that year. Zito also sent out Suave Prospect (1995) and Dialed In (2011). Though Zito does not have the same level of stock he had in the 1990s and 2000s, he recently reached the career milestone of 2,000 victories.

Kiaran McLaughlin trains for the prestigious Shadwell Stables, one of the premier breeding and racing operations in the world. He has no shortage of promising young horses and saddled Closing Argument to win in 2005 before that colt went on to run second in the Kentucky Derby. He also won with Cairo Prince (2014) and Mohaymen (2016).

In addition to Go for Gin, the Holy Bull Stakes has produced another Kentucky Derby champion – the ill-fated Barbaro. Prior to the Holy Bull Stakes, Barbaro was a relative unknown. The bay son of Dynaformer was undefeated from three starts but all of them, including the Tropical Park Derby (G3), had come on turf. The Holy Bull Stakes would be his first start on the dirt and a major test.

Barbaro showed that while he was very good on turf, he was brilliant on conventional dirt and he defeated eleven rivals by ¾ of a length as the favorite to stamp himself as a legitimate Kentucky Derby contender. He went on to win the Florida Derby (G1) and the Kentucky Derby (G1) before suffering a catastrophic injury in the Preakness Stakes (G1).