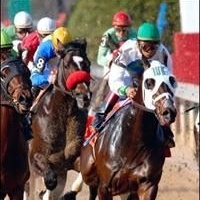 As the focal point of thoroughbred horse racing in the American south for more than 100 years, Oaklawn Park Race Track in Hot Springs, Arkansas is home to the Racing Festival of the South. Oaklawn hosts a winter/fall meet that typically runs from mid-January to mid-April and includes almost 60 days of live racing. On the calander of races at Oaklawn is a number of graded-stakes events offering more than $8 million in purses, including the Grade 1 Apple Blossom Handicap, and the Grade 1 Arkansas Derby.

You can make your Oaklawn Park Race Track picks live at the track, at an OTB site or with one of these recommended online racebooks, that provide the opportunity to increase your payouts with cash back on all wagers and other bonuses and promotions.

Somewhat unique for a major race track in the US, Oaklawn Park does not have a turf racing surface, and so it’s important for handicappers to take note of horses that are shipping in after running on the grass at other tracks. If you’re considering a future wager in the running of the Kentucky Derby, you should pay attention to the Derby prep races hosted at Oaklawn and consider the results in your betting strategy.

Held in mid-February, the Grade 2 Southwest Stakes is the first of the three Derby Prep races at Oaklawn, and open to horse aged three, racing 1 1/16 miles for a purse of $500,000. Recent notable winers of the Southwest include Tapiture (2014) who would go on to collect three more graded stakes victories in his career, Secret Circle (2011), a two-time Breeders’ Cup winner, Lawyer Ron (2006) who was named the Eclipse Award Champion Older Horse in 2007, and of course Smarty Jones (2004) who took both the Kentucky Derby and Preakness Stakes that year.

One month after the Southwest Stakes, Oaklawn Park plays host to the second of their Kentucky Derby prep races in the form of the Grade 2 Rebel Stakes, also for three years olds running 1 1/16 miles, for a total purse of $900,000. Some of the best horses in training in the US have been recent winners of the Rebel, most notably American Pharoah, who took the race in 2015 on his way to an historic sweep of the Triple Crown.

Hoppertunity (2014) went on to several graded-stakes wins after the Rebel, including twice winning the Grade 1 Clark Handicap. The 2013 winner, Will Take Charge, won the (G1) Travers Stakes, the (G2) Pennsylvania Derby and (G1) Clark Handicap all in the same year, while Lookin’ At Lucky (2010) won the (G1) Preakness Stakes and Curlin (2007) won both the Preakness and the (G1) Breeders’ Cup Classic.

The last and richest of the Oaklawn Kentucky Derby preps, the Arkansas Derby goes in mid-April and closes out the Oaklawn meet. A Grade 1 race for three year olds stretching out to 1 1/8 miles, the Arkansas carries a total purse of $1 million.

The previously mentioned American Pharoah also won the Arkansas Derby in 2015, and the 2016 winner, Creator, went on to capture the (G1) Belmont Stakes. It’s interesting to note that outside of those two, horses coming off a win in the Arkansas have not gone on to as much success in the big summer races recently as the winnners of the Rebel have, but going back to the mid-2000s there was a string of Arkansas Derby winners who then went on to capture at least one leg of the Triple Crown, including Curlin (2007), Afleet Alex (2005) and Smarty Jones (2004).

In addition to the Kentucky Derby preps, Oaklawn Park also hosts the Grade 1 Apple Blossom Handicap, one of the biggest races in North America for female horses. Held on the Friday prior to the Saturday running of the Arkansas Derby, the Apple Blossom is for fillies and mares aged four and older, running 1 1/16 miles for a purse of $600,000.

The great mare Azeri won the Apple Blossom three times in a row, starting in 2002 when she was also named American Horse of the Year. Another recent multiple-race winner was Zenyatta, who took the victory in both 2008 and 2010, in between those two becoming the first – and so far only – female winner of the Breeders’ Cup Classic.

Besides all the great live racing action available at Oaklawn Park, the track is also open daily all year around for simulcast wagering. In 2015 Oaklawn underwent a major expansion of its gaming facilities, and now boasts one of the largest facilities in the region for table games, video poker, roulette and more.

For more information, visit the Oaklawn Park website at oaklawn.com.