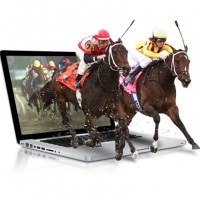 There is something for everyone in Louisiana when it comes to horse racing. It has numerous racetracks throughout the state featuring a variety of both Thoroughbred and Quarter Horse racing along with off track betting locations so horseplayers never have to miss a second of the live horse racing action. Louisiana has been a part of the horse racing landscape in the United States for a long time and boasts some of the most lucrative and competitive stakes races in the country. [+]

With premier racing for two-year-olds and three-year-olds, the future stars of the Triple Crown can be found at Fair Grounds or Delta Downs which host Kentucky Derby qualifying races.

While visiting the racetracks in Louisiana is a lot of fun, sometimes you just cannot make it to the Bayou. In those cases, be sure to utilize one of these recommended racebooks which makes it convenient and simple to get in on the excitement of Louisiana horse racing all from the comfort of home through a computer or mobile device.

Louisiana is home to several racetracks throughout the state with a variety of levels of Thoroughbred and Quarter Horse racing. There are top class stakes races as well as a competitive circuit of claiming and allowance races at each track. There are four major racetracks spread throughout the state so no matter where you are in the Bayou, there is a racetrack not too far away.

Delta Downs, located near Vinton, is an up and coming racetrack and continues to thrive with innovative races and an influx of revenue from expanded gambling. Originally opened in 1969, the track was given new life with the advent of expanded gambling and opened a hotel and racino with over 1500 slot machies in 2005. Despite being badly damaged by Hurricane Rita, repairs were made and the quality of the horse racing at Delta Downs has continued to develop and improve.

The track itself is modest in size – it is a six furlong oval with additional chutes to accommodate various other distances for Thoroughbreds and Quarter Horses. Live racing season begins in November and continues through July. Thoroughbred racing takes center stage in the fall and the Quarter Horse meet primarily takes over in the Spring.

The track’s premier race is the $1 million Delta Jackpot Stakes. Restricted to two-year-olds, the Grade 3 race has attracted top quality fields since the inauguration in 2002 thanks to the generous purse structure. The race has produced both a Preakness Stakes winner (Exaggerator, 2015) and a two-time Breeders’ Cup Dirt Mile winner (Goldencents, 2012). There is also the filly equivalent, the $500,000 Delta Princess.

The track has a one mile dirt oval and inside of that, a seven furlong turf course. Slot machines were added to the track in 2007 and continue to contribute to strong purses and breeding incentives in the state.

There are numerous graded stakes races held at Fair Grounds throughout the year but the most anticipated is the Louisiana Derby, a Grade 2 prep race for the Kentucky Derby with a purse of $1 million. The race has produced two horses who have won both the Louisiana Derby and the Kentucky Derby – Black Gold in 1924 and Grindstone in 1996. Risen Star, the winner in 1988, went on to win both the Preakness and Belmont Stakes.

Louisiana Downs is located the northwestern part of the state in Bossier City. The track opened in 1974 and hosts live racing annually from May through October for Thoroughbreds. Quarter Horse racing season kicks off in January and runs through March.

The premier event at Louisiana Downs is the Super Derby, a race with a long history of attracting some of the best three-year-olds in the country after the Triple Crown. The Grade 3 event is run at a mile and an eighth currently though it was originally held at the classic distance of a mile and a quarter. The race has been won by such great horses such as Alysheba (1987), Sunday Silence (1989) and Tiznow (2000).

Evangeline Downs is located in St. Landry Parish and opened in 1966 though it did change location in 2005. The track has a one mile dirt oval and holds live racing from April through September.

While it does not have the major stakes races some if its fellow Louisiana racetracks have, Evangeline Downs has been the stepping stone for many great horses and horsemen in the course of their careers. Legendary John Henry won the first stakes race of his career there in 1977.