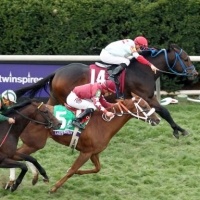 The Breeders Cup current Turf odds are listed from the top-tier providers operating in the United States.

For fans of horse racing on the grass, the Breeders’ Cup Turf is perhaps even more significant to the Breeders’ Cup World Championships than even the BC Classic. For horses aged four and older, the BC Turf is run over 1 1/2 miles, making it the longest of the BC races, and offers a purse of $4 million. An original race in the BC schedule, in 2003 the Turf produced the one-and-only dead heat in the history of the Breeders’ Cup. The 2022 BC Turf goes on November 5th.

You can get the morning line Breeders’ Cup Turf betting odds, cash back and other bonuses as well when you open an account and make your Breeders’ Cup bets with one of these recommended racebooks.

A glance at the past results of the BC Turf reveals one thing quite clearly - since the very first Turf race in 1984, when horses bred outside of the US swept the top three spots - the race has been dominated by foreign runners. In the 32 Turf races since the event began, horses born and raced outside of the US have won 20 times. Twelve of those winners were bred in Ireland, with two of those winning twice.

Three other winners were bred in the UK, and one each in Germany, France and Canada. Seven times horses bred outside of the US swept the top three spots in the race, while US horses have swept the top three only three times. The success of European-based horses has be considered in Breeders' Cup Turf betting.

The two double winners of the Turf were High Chapparal (IRE) in 2003-'04, when he was involved with Johar in the previously mentioned dead heat, and Conduit (IRE) in 2008-'09. Those back-to-back wins demonstrate another important handicapping point in the Turf, in that many horses run the race more than once in their career.

More recently, Flintshire finished second in 2014 and then again in 2016. Two horses, Buck's Boy in 1998-'99, and Found in 2015-'16, won their first crack at the Turf and then finished second the next year. What all this means is that horses that have done well and finished in the money once in the Turf have a good shot at doing so again.

Looking at the prices paid out on the Turf over the past 10 races, the average winner has gone off at odds of 7-1, with a couple winners in the low double digits. Only one heavy favorite has won in that time, although it's interesting to note that the favorite seems to run second a lot in the Turf, four times in the past five years.

Given that Irish-breds and other European horses do so well when they come to North America for the BC Turf, you have to rate the turf racing across the pond as more competitive than what is generally found in the US, and past results for those horses shipping in from overseas have to be taken in a bit of context when handicapping the race.

Which Horses To Back

Highland Reel was winless in three starts before winning the Turf in 2016, but he was second in two of those races, the Arc de Triomphe in France and the Juddmonte International in England, two of those countries' biggest events. The year before, Found came into the BC Turf on a three-race losing streak, but again, two of those losses were runner-up finishes in Group 1 races, one being the Irish Champions Stakes.

This is not to say US-breds should be completely ignored when handicapping the race, and the fact is, good American contenders are often overlooked at the betting window and can offer some value. American horses have won four of the past 10 BC Turf races, with Little Mike in 2012 paying 17-1, and Dangerous Midge 9-1 in 2010, in both cases keying triple-digit exactas, and in the latter case, a Daily Double payout close to $1000.