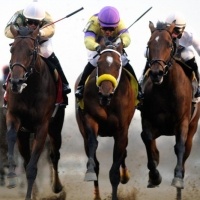 The second-oldest stakes race in the United States, the Jerome Stakes was first run in 1866 at the defunct Jerome Park. The race was moved to Morris Park Race Course, then to Belmont Park and finally to Aqueduct Race Track where it has been since 2011. It has been part of the Kentucky Derby points series since 2013, with the top four finishers receiving points toward a spot in the Derby starting gate on a 10-4-2-1 scale. The Jerome is typically run in late January.

Whatever handicapping strategy you use to make your Jerome Stakes picks, you can make your wagers at the track, at an OTB, or through one of these online racebooks, where you can receive win-or-lose cash back and take advantage of other bonuses and promotions.

At a compact 1 mile and 70 yards distance on the tight inner dirt track at Aqueduct, there are a few different factors to consider when putting together a betting ticket for the Jerome. One of the most important is to look for horses that possess good early speed that would enable them to get a front-running position early going into the first turn.

It is more difficult to make up ground for horses running behind on the inner dirt track at Aqueduct than it is on other tracks due to the track's wider, more sweeping turns.

Four of the past five winners, over the past five years, were never more than 2 lengths off the lead at any point of the race, with the lone exception being Flexibility, who came from back off the pace to win in 2016. Even he was only a head behind the leader 3/4 of a mile into the race.

You should also take a look at whether any of the horses have previous running experience in races where they have to go around two turns, as they do in the Jerome.

Making smooth, tight corners in racing conditions is one of the toughest things for young, inexperienced horses to master, and horses that have done so in races prior to the Jerome should be given a bit more credence than horses trying two turns for the very first time.

As for how to bet the race with an eye to the odds and return on the wager, the Jerome has clearly been a "favorites" race over the past few years, as the odds-on favorite on the tote board has won four of the past five races, with the other, El Areeb this year, being the second choice at 3-1 (in a race where the favorite actually finished dead last).

If you want to bet the trend, include the favorite at the top of your ticket. You can reduce your betting cost simply by putting the favorite on top of both the exacta and the trifecta, then slotting two or three other choices underneath.

In this scenario, the favorite must win the race in order for you to collect a payout, but again, you cut down on the cost of the bet this way, and if the favorite wins with one of your other choices running second (in an exacta) or second and third (for a trifecta) you're fine. If the favorite doesn't win, you haven't gone too deep into your wagering bankroll.

This kind of calculated money management is one of the key factors in long-term handicapping success at the races.