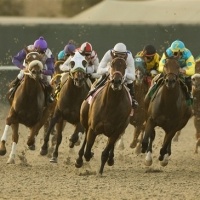 Officially known as the Del Mar Thoroughbred Club, the race track at Del Mar, California has long operated under the slogan “Where the Turf Meets the Surf”. Founded in 1937 by a group of Hollywood celebrities, Del Mar today holds two live race meets from mid-July to September, and then a second meet in November. The home of the $1 million Pacific Classic Stakes, in 2017 Del Mar is also slated to play host to the Breeders’ Cup World Championships for the first time in the 33 year history of the event.

During the two live racing meets at Del Mar, you can get the Del Mar Park results for the day on your PC or mobile device when you bet with one of these highly rated online racebooks.

Despite its relatively short racing season, Del Mar packs a lot of punch into its two race meets, the Summer Meet in July through early September, and the Bing Crosby Meet that runs in November and the first week of December.

Famous for hosting the $1 million Pacific Classic, the track also is home to dozens of other stakes races, including 31 graded-stakes races, with eight of those being Grade 1 events. What this means is that there are lots of great opportunities for handicappers interested in Del Mar racetrack betting, and the following are just some of the races that fans should keep an eye on throughout the season.

Named for the founder of California's Oak Tree Racing Association, the Clement Hirsch is open to fillies and mares age three and older, run over 1 1/16 miles on the dirt course for a current purse of $300,000. Originally known as the Chula Vista Handicap for two-year-old fillies, the first race was run the same year Del Mar opened, and the was won by a filly owned by track co-founder Bing Crosby.

As the Clement L. Hirsch, the roster of winners includes some of the all-time greats in American racing, including Zenyatta, a three-time winner from 2008-'10, and Azeri, who captured back-to-back titles in 2002-'03. The Clement L. Hirsch is typically run on the last weekend of July.

Held on the same weekend as the Clement L. Hirsch, the Bing Crosby is of course named for the entertainer and co-founder of Del Mar. A six-furlong sprint on the dirt for horses three years and older, the race has a purse of $300,000.

First held in 1946, the very first running of the Bing Crosby is notable because it also produced the one-and-only dead heat in the history of the race between the horses War Allies and Indian Watch. In 2016, Lord Nelson not only won the race but did so in race-record time.

The centerpiece event at Del Mar, the $1 million Pacific Classic is opne to horse aged three and older, and is run at the distance of 1 1/4 miles on the dirt track. First run in 1991, the race has had many notable performances, including Julie Krone becoming the first female jockey to win a $1 million race when she guided Candy Ride to victory in a race-record time that still stands.

In 2015, Beholder became the first distaff winner of the race, and Bertrando was the winnerin 1993, the same year he was named US Older Horse of the year. The Pacific Classic is scheduled to be run on August 19, 2017.

When Hollywood Park closed in 2014, Del Mar inheirited that track's signiture event, the Hollywood Derby for horses aged three running 1 1/8 miles on the turf course for a purse of $300,000.

Running at Del Mar the first time, the race was won by California Chrome, capping off the season that saw him win the Santa Anita Derby, the Kentucky Derby and the Preakness Stakes, on his way to winning the US Horse of the Year award. The Hollywood Derby is typically run in early on the last weekend of Del Mar's Bing Crosby meet.

The female complement race to the Hollywood Derby, the Matriarch is also held on the closing weekend of the fall Bing Crosby meet. The race is open to fillies and mares age three and older, and is run at a ditance of 1 mile on the turf course, for a purse of $300,000.

In the early 90s, the team of the horse Flawlessly, jockey Chris MacCarron and trainer Charlie Whittingham dominated the event, winning three consecutive Matriarchs from 1991 to 1993. First run in 1981 at a distance of 1 1/8 miles, the race was also contested at 1 1/4 miles from 1995 to '98, switched back to 1 1/8 mile for the next four yars, and has been at its present distance since 2003.

While not a single stakes race, the Breeders' Cup will highlight the Del Mar racing season in 2017, with the two-day event freaturing 13 different Grade 1 races scheduled for November 3 and 4.