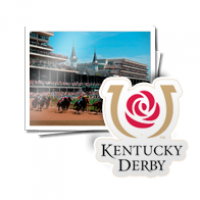 One of the most iconic horse races in the world, the Kentucky Derby is run every year since 1875 on the first Saturday of May under the Twin Spires at Churchill Downs in Louisville, Kentucky.

The idea for the Kentucky Derby came from the Epsom Derby, which had been running in England since 1780. Based on the Epsom, the Kentucky Derby was designated as a race for three-year-old horses, originally run at the Epsom distance of 1 1/2 miles. After a few years this was shortened to 1 1/4 miles, as it remains today.

Over the past 100 years, the Kentucky Derby has also gained prominence as the first leg in the US Triple Crown of racing, which also includes the Preakness Stakes and the Belmont Stakes. Since the first Triple Crown winner in 1919, only 12 other horses have accomplished the feat.

As of 2019, the Kentucky Derby will offer a total purse of $2 million, with $1.4 million going to the winner. The winning horse also recieves a blanket of roses, thus the race is often referred to as “The Run for the Roses.” It is often also called “The Greatest Two Minutes in Sports” since it takes the horses roughly two minutes to run the race.

While hundreds of horses are nominated every year to race in the Kentucky Derby, only 20 make the starting gate. As the horses progress through their two-year-old and into their three-year-old racing season, the best ones begin to stand out, and horseplayers can start to narrow in on future bet choices.

Long before the race is run, racebooks such as Bovada start to offer future bet choices, and locking in a potential Kentucky Derby winner early can lead to a huge payout if your choice hits the wire first on the first Saturday of May.

Keep checking in with these top-rated online racebooks to find a future bet winner in the field.

The Road to the 2019 Kentucky Derby

Starting in 2013, Churchill Downs implemented a qualifying-points system to determine the 20 horses that will make it into the Kentucky Derby field. Prior to this, quaifying for the Derby was based on money earned in graded-stakes races.

Typically horses trying to qualify for the Derby will each run in three or four of the 35 races held in the US to try and gain enough points to quaify. There is no set schedule for when a particular horse will run in a particular race, as entering a horse is at the discretion of the trainer when he feels a horse is ready to run.

The US qualifying series is divided into two segments. First is the “Prep Season” of 19 races held at 12 different tracks starting with the  Iroquios Stakes on September 15, 2018 st Churchill Dowsn, and ending with the Southwest Stakes on February 18, 2019 at Oaklawn Park in Arkansas.

For these races, points are awarded to the top four finishers on a 10-4-2-1 scale.

Just as the Prep series is wrapping up, the horses move to the Championship series, which itself is divided into two legs. The first leg begins on February 16 with the Risen Star Stakes at Fair Grounds in New Orleans, and ends seven races later with the Sunland Derby on March 24 at Sunland Park.

The second leg of the Championship series kicks off March 23 with the Louisiana Derby at Fair Grounds and runs another seven races – including the UAE Derby at Meydan Race course in Dubai – and ends with the Arkansas Derby on April 13, just three weeks before the Run for the Roses.

In addition to the main US qualifying, there are also two “wild card” races in the spring that award points on a 20-8-4-2 scale.

In an effort to broaden the international appeal of the Derby, race organizers decided to reserve two of the 20 starting spots for overseas qualifiers, one from Japan starting in 2017, and one from Europe starting in 2018. There are four races in Japan that award up to 30 points for the winner, and seven races in Europe.

In 2018, Magnum Moon qualified #1 overall for the Kentucky Derby with 150 points, while Instilled Regard grabbed the #20 spot with 29.

Following along during the Road to the Kentucky Derby qualifying series is a key to handicapping not only the Derby itself, but the entire Triple Crown series.

As the contenders start to emerge from the pack by gaining points for either winning or getting into the top four of each race, it obviously helps bettors narrow in on lucrative future bet choices for both the Derby and Triple Crown.

And when race day comes, having a clear idea how each of the horses managed to get into the race in the first place goes a long way to figuring out how they run, what kind of competition they have faced and if they are in top form to hit the Churchill Downs finish line in front.