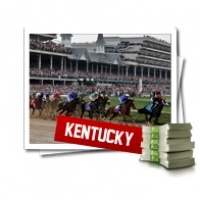 Kentucky may be the Mecca of horse racing in the United States but the state does not have any stand alone off track betting facilities. Horseplayers need not despair, however – there are numerous tracks in the state open year-round for simulcasting even when not conducting live racing and there is always the option of an online racebooks so you do not have to miss a moment of the horse racing action even when you are on the go. [+]

Kentucky is home to some of the most renowned racetracks in the world including the historic Churchill Downs and the bucolic Keeneland. The Bluegrass State is also where many of the top Thoroughbred racehorses get their start, go through the prestigious Keeneland sales ring or retire to their broodmare or stallion career at the conclusion of their time on the racetrack.

Even if you cannot make it out to one of Kentucky’s racetracks to watch the races live or wager through their simulcasting options, savvy horseplayers can get in on all of the action through one of these recommended racebooks. With an online racebook, you can take advantage of exclusive promotions, rebates and incentives all from the convenience of a computer or mobile device.

No matter where in Kentucky you may be, a racetrack is not far away. Kentucky is the Thoroughbred capital of the country and there are numerous tracks with top class racing, big fields and rich histories.

The most famous racetrack in Kentucky and arguably the world is Churchill Downs. Located in Louisville, Churchill Downs opened in 1875 and is the home of the Kentucky Derby as well as numerous other graded stakes races throughout the year. In addition, Churchill Downs has been the host of the Breeders’ Cup eight times and will again be the stage for the event in 2018.

Churchill Downs hosts three separate racing meets – one in the spring, one in the fall and recently added has been a brief race meet in September each year. The track has both a one mile dirt track and a seven eighths of a mile turf course.

Keeneland Racecourse, located in Lexington, opened in 1936 and is one of the most popular and beautiful racing destinations in the country. There are two separate racing seasons – the spring meet in April and the fall meet in October. Each host a variety of top caliber graded stakes races on both dirt and turf. Keeneland held the Breeders’ Cup for the first time in 2015.

The main track is a mile and a sixteenth oval and inside of that is the seven and a half furlong turf course. The main track was converted to Polytrack, a synthetic surface, in 2006 but was transitioned back to conventional dirt in 2014.

In addition to racing, Keeneland is also known for the prestigious Keeneland sales which are held over the course of the year and feature some of the most promising and expensive horses in the world. Many future stars of the sport graduate from the Keeneland sales ring.

Ellis Park, located in Henderon just south of Indiana, opened in 1922. Live racing season begins in July and traditionally runs through Labor Day. There is both turf and dirt racing and the season is highlighted by the Groupie Doll Stakes, a Grade 3 event for fillies and mares.

Turfway Park is just outside of Florence, Kentucky and has been open since 1959. The track is one of the few remaining in the country to still have a synthetic track – the one mile oval is made up of Polytrack. There is no turf course.

Turfway Park hosts two racing seasons over the course of the year and is always open for simulcasting. Live racing is held for their Holiday Meet in December and then the Winter/Spring meet runs from January through early April.

Turfway Park is best known for the Spiral Stakes, a Grade 3 event for three-year-olds that is an early prep race on the road to the Kentucky Derby.

Kentucky Downs opened in 1990 and hosts one of the most profitable and popular boutique racing meets in the country. The track has a unique racing surface – the main track is turf, not dirt as is traditional in America and the configuration is not a perfect oval.

There are only a handful of racing dates held every year and they are typically run in September. The meet features the Kentucky Cup Turf Festival which showcases some of the best turf horses in the country in multiple divisions.