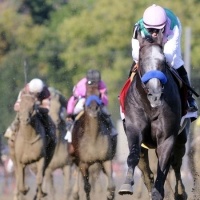 As the first state outside of Nevada to permit off track betting, New York has made this type of betting possible since the early 1970s, and at one point there were hundreds of OTB sites in New York City. These days, OTB parlors are operated by five regional gaming commissions, and although there are no longer OTBs in the city, there are more than 50 throughout other areas of the state.

Even though there are plenty of New York off track betting sites you can visit, sometimes betting on the horses from home is the most convenient way to get in on the action, and all these top-rated online racebooks are available for wagering from your PC, mobile device or tablet.

While it's not possible to find an OTB location in New York City, residents of the area have a number of options to take in live racing, with thoroughbred racing at Belmont Park and Aqueduct Race Course, as well as harness racing at Yonkers Raceway - plus another option for both thoroughbred and harness racing across the Hudson River in New Jersey at the Meadowlands Race Track.

Elsewhere in the state, fans of live racing can get their fix in the summer at historic Saratoga Race Course, or at Finger Lakes Gaming and Racing in Farmington near Rochester.

Perhaps the most well-known of the New York tracks, Belmont is home to the Belmont Stakes, the third and final leg of the US Triple Crown. Belmont was first opened in 1905 and is known for the size of the track, with its wide, sweeping turns on both the main dirt track and the main turf course.

Measuring 1 1/2 miles, the dirt track at Belmont is the longest in the US with a final stretch of just under 1100 feet - the place where many a dream for a Triple Crown championship has died.

Belmont Park currently holds two race meets, one in the spring from May to late July, and a second in the fall from from early October to the end of November.

Located in Jamaica, Queens, Aqueduct Race Track was first opened in 1894. Known as the home of winter racing in New York, the track has a main dirt track, and inner dirt track with a special surface for winter racing, and a turf course.

Racing begins every year in late October or early November and continues through April. Aqueduct hosts more than 35 graded stakes races throughout it's schedule including Grade 1 races the Carter Handicap, the Cigar Mile Handicap and the Wood Memorial Stakes.

In 2011 the Aqueduct facilty was expanded to include a casino.

First opened in 1863, Saratoga is known as the oldest thoroughbred track in the United States and the third oldest track worldwide.

Located upstate in Saratoga Springs, the track holds a summer meet from late July through to the first weekend of September. It is quite popular as a summer vacation destination for thousands of horse racing fans. The track has a main dirt track, a one-mile turf course and a second inner turf course.

The track also occasionally hosts steeplechase racing. With racing happening daily throughout the meet, Saratoga hosts 35 graded-stakes races, with 15 of those being Grade 1 events, including the Whitney Handicap, the Woodward Stakes, the Alabama Stakes and the Travers Stakes, often referred to as "the summer Derby" in reference to the Kentucky Derby.

Saratoga is also well known for its hosting of the Fasig-Tipton auction of young thoroughbred horses, held every August during the race meet.

Perhaps the least known of the New York tracks, Finger Lakes is located in western New York in Farmington, not far from Rochester. First opened in 1962, the track offers 160 days of live racing and also includes a racino, opened in 2004. While Finger Lakes does not host any graded-stakes races, they do host the $150,000 New York Derby, as well as more than 15 other stakes races.

First opened in 1899 as the Empire City Race Track, Yonkers Raceway is a harness racing track and casino located in Yonkers, New York.

The track is most notable for hosting the Art Rooney Pace, the Yonkers Trot and the Messenger Stakes, with the latter two being part of the US Trotting (Yonkers) and Pacing (Messenger) Triple Crown.