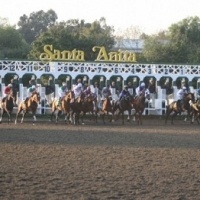 The signature race at Santa Anita Park in Arcadia, California, the Santa Anita Derby was first run in 1935, and since then has gone on to become one of the premier events for three-year-old horses in North America. Held in early April, the SA Derby is run at the distance of 1 1/8 miles on the Santa Anita dirt course, and carries a purse of $1 million. As part of the Kentucky Derby Challenge Series, the SA Derby awards the top four finishers with points toward a spot in the Kentucky Derby gate on a 100-40-20-10 scale.

Once the entries have been taken and the field is set, you can handicap the race to find your Santa Anita Derby winner, and then get in your bet at the track, at an OTB, or through your PC or mobile device with one of these top-rated online racebooks.

In addition to being the highlight race of the Santa Anita stakes schedule, Santa Anita Derby past performances have in recent years been a key indicator of future success for horses that have gone on to contest the Triple Crown.

In 2012, the Doug O’Neill-trained I’ll Have Another won the Santa Amita Derby, running the fastest time recorded in the race in 10 years, and then went on to take the Kentucky Derby and Preakness Stakes, and was considered the solid favorite for the Belmont Stakes and a Triple Crown title until coming up with a foot injury and having to be scratched from the Belmont.

Two years later, California Chrome followed almost the exact same path, winning the Santa Anita Derby in a time even faster than I’ll Have Another, then winning the Kentucky Derby and the Preakness, going into the Belmont as a solid favorite, but coming up short in his Triple Crown bid when he ran fourth in the Belmont.

One of the most significant performances for a horse coming out of the Santa Anita occurred in 2001, when Point Given won the race and then in the same year captured the Preakness Stakes, the Belmont Stakes, the Haskell Invitational Stakes and the Travers Stakes, becoming the only horse in US racing history to capture four consecutive $1 million races.

Winners Go On To Big Things

Running down the list of other Santa Anita Derby winners over the years gives a clear indication of how the race has long been a stepping stone to greatness. AP Indy was the race winner in 1992 and then took the Belmont Stakes and the Breeders’ Cup Classic on his way to being named Three-Year-Old Horse of the Year. The 1989 winner, Sunday Silence, then took the Kentucky Derby and Preakness, ran second in the Belmont, and then won the Breeders’ Cup Classic.

And of course, no list of significant Santa Anita Derby winners can be complete without mentioning the legendary Affirmed, who won the race in 1978, setting up perhaps the greatest Triple Crown rivalry in history between himself and Florida Derby champion Alydar.

The two horses met three times in the Triple Crown, with Affirmed winning all three battles by 1 1/2 lengths in the Kentucky Derby, by a neck in the Preakness, and by a nose in the Belmont. The 1978 Belmont, in particular, is considered by some to be one of the greatest races ever run, as the two horses put away the rest of the field and then matched each other stride-for-stride for almost 3/4 of a mile before Affirmed finally prevailed by the narrowest of margins at the wire.

The 2017 Santa Anita Derby is set to be run on April 8. Check back with Be A Better Bettor for future updates on entries, contenders and odds.