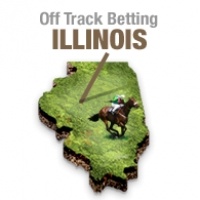 There are numerous options for horse racing fans in Illinois to take part in exciting horse racing action. With two quality Thoroughbred racetracks as well as several off-track-betting facilities, the possibilities are endless. Thoroughbred racing has been a part of the landscape of Illinois since the 1920s and has showcased some of the very best in the history of the sport. In addition to Thoroughbred racing, Illinois also is home to harness racing with Standardbreds as well.

Horse racing fans always have an option in Illinois. Even if they cannot make it to one of the state’s top racetracks to watch and wager on the action in person, they can still take part in the horse racing excitement at one of the many physical OTB locations or through one of these recommended online racebooks.

The Thoroughbred horse racing industry in Illinois continues to be strong and the state also supports a respectable breeding program. In recent years, Illinois-bred racehorses like The Pizza Man have vaulted to the national spotlight and have become contenders on the international stage. There are two major Thoroughbred racetracks in the state – Arlington Park and Hawthorne Racecourse – as well as several off track betting locations.

Arlington Park opened its doors in 1927 and has one of the richest histories of any track in the country. Though the track faced significant hardship when a fire rampaged through and destroyed both the grandstand and clubhouse in 1985, the facilities were rebuilt and the quality of racing returned to be better than ever.

Arlington Park remains one of the final tracks in the United States to have a synthetic main track as well as a turf course.

Some of the major stakes races at Arlington are held on their impressive turf course including the Arlington Million, the Beverly D. Invitational and the Secretariat Stakes. These Grade 1 events feature some of the top turf horses in the world and routinely attract an international quality field. One of the most noteworthy winners of the Arlington Million was the great John Henry who was the victor in both 1981 and 1984 as part of his remarkable Hall of Fame career.

Hawthorne Racecourse may not have the prestige of Arlington Park but it does have an extended and deep history of its own. It opened in 1891 and survived a temporary ban on horse racing in the state in the early 1900s.

The track has a one mile main track and a seven furlong turf course. The stretch is one of the longest in the country and measures 1320 feet. Though the track has lost some of its luster in recent years and the Illinois Derby has been excluded from the Kentucky Derby points system, the track still does host several graded stakes races throughout the year.

Situated at Arlington Park Racetrack, this OTB is one of America’s largest and best off-track wagering establishments. Here, fans have the opportunity to watch and wager on races from across the country even when horse racing is not in season at Arlington Park itself.

Shooters’ Bar & Grill is open seven days a week and is a comfortable and fun way to watch and wager on your favorite races. There are over 80 television monitors throughout the facility so you can always watch exactly the race you want.

Waukegan OTB is a casual and comfortable way to settle in and watch and wager on horse racing from all across the United States. There are several different dining options so there is something for every taste. Not to mention there are over 250 television monitors so you can keep an eye on the action from anywhere.