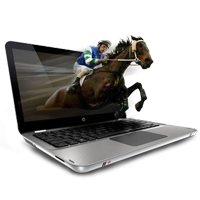 Pennsylvania was at one point regarded as home of only second-class horse racing but, with the advent of expanded gaming in the state in the early 2000s, the racing industry and breeding industry in Pennsylvania has continued to grow and develop. With six racetracks spread throughout the state featuring harness racing and Thoroughbred racing, there is always an option for a horseplayer who wants to get in on the action. [+]

In addition to a thriving breeding industry and numerous racetracks with competitive day to day racing nearly year-round, there are several major graded stakes held at Parx and Penn National, the two top Thoroughbred tracks in the state. These races continue to attract world class competition as well as some of the top jockeys and trainers in the country each year.

Even though there are numerous options to watch and wager on live horse racing in Pennsylvania, sometimes it just is not possible to get to the racetrack. When that is the case, check out one of these recommended online racebooks so you do not have to miss a second of the excitement. They are safe, secure and offer promotions, rebates and incentives not available anywhere else.

Whether your preference is harness racing or Thoroughbred racing, there is something for everyone in Pennsylvania and the action continues practically year round.

Parx has one of the oldest and richest histories of any facility in the state and has undergone many changes since the doors opened in 1974. Located in Bensalem, the track was originally called Keystone Park. The name changed to Philadelphia Park in 1984. With the addition of expanded gambling options, the track reopened in 2009 under the new moniker – Parx Racing and Casino.

The track has a one mile dirt main track and a seven furlong turf course. Live racing season is held year-round and the premier races are the Pennsylvania Derby and Cotillion Stakes. Both are restricted to three-year-olds, have a purse of $1 million and are Grade 1 events.

The Cotillion has held Grade 1 status since 2012 and the Pennsylvania Derby will be upgraded for the first time in 2017. Both races are held in September and have routinely attracted some of the best sophomores each year. In 2016, the Cotillion Stakes was won by Eclipse champion Songbird and the Pennsylvania Derby has been won by such top horses such as Broad Brush, Will Take Charge and Bayern.

Located in Grantville, Penn National opened in 1972 and it has been helped exponentially by the advent of expanded gaming which was added to the facility in 2008. It offers live Thoroughbred racing year round and has a one mile main track and a seven furlong turf course.

The track has several major stakes races which are held on their turf course. One, the Pennsylvania Governor’s Cup, is a Grade 2 event and the $500,000 Penn Mile was recently granted graded stakes status – it is currently a Grade 3 and was run for the first time in 2013.

Presque Isle Downs, which opened in 2007, is one of the newer additions to the horse racing landscape. Located near Erie, the track is a one-mile oval and is the lone synthetic surface in the state – it is made of Tapeta, a mixture of sand, rubber, fiber and wax which is less sensitive to inclement weather. It is one of the few tracks in the United States that has remained synthetic after the trend became to switch back to conventional dirt.

Live racing is held from May through October and the track hosts several stakes races including the Grade 2 Presque Isle Downs Masters Stakes.

Pocono Downs is home to live harness racing and is located on the edge of Wilkes-Barre. They have expanded gaming as well as a five-eighths of a mile harness track. Mohegan Sun owns and operates the facility and also has several off track betting locations throughout the state.

Harrah’s Philadelphia hosts live harness racing from April through December each year. The track opened for operation in 2006 in Chester, Pennsylvania and has a five-eighths of a mile harness track.

The Meadows, not to be confused with New Jersey’s harness track, the Meadowlands, is located in Washington, Pennsylvania. The track has the distinction of being the first pari-mutuel track in the state and opened in 1963. There is live racing practically year-round and there is a standard five-eighths of a mile surface.