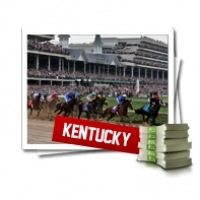 The Kentucky Oaks is one of the oldest and most prestigious races in the country. Restricted to three-year-old fillies, the race is the female equivalent of the Kentucky Derby, though fillies are also eligible to compete in the Run for the Roses. Traditionally held on the Friday before the Kentucky Derby, Kentucky Oaks Day has grown into a major event of its own right and is one of the most anticipated Thoroughbred horse racing events on the calendar. [+]

Handicapping the Kentucky Oaks involves paying close attention to how the Churchill Downs main track is playing in the days leading up to the big race. In addition to watching for hot jockeys, live trainers and any potential track bias, it is worth having an understanding of the history of the Kentucky Oaks as well.

While Churchill Downs does typically play as a very fair racing surface, the weather can change the dynamic of the race very easily. When rain is in the forecast, the track can be sealed in preparation for the weather and that can make it easier for a front-runner to go gate to wire.

Bird Town, a homebred for Marylou Whitney and trained by Nick Zito, set the stakes record for the mile and an eighth contest in 2003 when she completed the race in 1:48.64 – Untapable came close to meeting that mark in 2014 when she stopped the clock in 1:48.68.

Rachel Alexandra romped in the Kentucky Oaks in 2009 by a record-setting 20 ¼ lengths, the largest margin of victory in history, and wheeled back only two weeks later to win the Preakness Stakes.

There have been some big upsets in Kentucky Oaks history over the years but none moreso than Lemons Forever in 2006. After struggling in her only previous start against stakes company and only having a maiden and allowance/optional claiming victory to her credit, she pulled the upset under jockey Marcus Guidry at odds of 47-1 for trainer Dallas Stewart. It wound up being the lone stakes win of her career.

Jockey Rosie Napravnik made history in 2012 when she piloted the aptly-named Believe You Can to win and became the first female jockey to win the Kentucky Oaks. She came back two years later to repeat that feat with champion Untapable in 2014 before announcing her retirement at the end of that year.

Throughout history, there are two jockeys tied for the most wins with four each – Eddie Arcaro (1951, 1952, 1953 and 1958) and Manuel Ycaza (1959, 1960, 1963 and 1968). However, there are several contemporary jockeys still actively competing and riding for the top barns in the country so those records could be in jeopardy. Jockeys like Gary Stevens, Mike Smith and John Velazquez are always major contenders on big days in horse racing.

While it has been decades since he has had a Kentucky Oaks winner, Lukas is still competing at racing’s highest level and could return to the Kentucky Oaks with a live contender at any time.

In recent years, trainer Larry Jones has been a dominant force in the Kentucky Oaks with three winners in the past ten years – Proud Spell (2008), Believe You Can (2012) and Lovely Maria (2015). In each of those races, the win was the first for the jockey in the Kentucky Oaks. Proud Spell was ridden by Gabriel Saez, Believe You Can had Rosie Napravnik aboard and the veteran Kerwin Clark was in the irons for Lovely Maria.