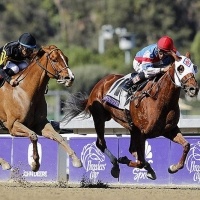 The Breeders Cup current Filly And Mare Sprint odds have been picked up from the best bookmakers in the US.

Historically a very competitive race on the BC schedule, the Breeders’ Cup Filly and Mare Sprint betting odds are typically well spread out, and that means you can expect a good return on your wagers if you make a winning bet with one of these well known online racebooks.

With an average winning odds payout of 7-1 over the 10 editions of the Breeders' Cup Filly and Mare Sprint, the race has produced some decent payouts to handicappers over the years betting on the win. But from a pure return on investment point of view, the real value of the F&M Sprint has been in exotic betting, particularly in betting trifectas.

Taking a look at the past results of the race, it's noted that the favorite has won three times, and in two of those occasions the odds on the favorite were higher than 3-1, which demonstrates the favorite was lukewarm in the betting public's mind, and money was spread across several horses.

The only time this didn't really occur in the history of the race was back in 2008, when four horses in the field were bet at 6-1 or less, and the other 10 were all in double-digit odds. The winner that year was Ventura, who went off at just under odds of 3-1, and the favorite Indian Blessing ran second at just under 2-1.

Otherwise, multiple versions of the race have featured a large number of horses in the field leaving the gate in the 5-1 to 15-1 range, and it's these types of races that have produced the big exotic payouts.

So now that we know the trifectas can be the most lucrative way to bet the Breeders' Cup Filly and Mare Sprint, how does one actually go about putting together a sensible betting ticket?

Putting Together a Trifecta Ticket

It's clearly a bad idea to try and cover every horse in the race in every possible combination. Even a $1 trifecta bet like this in a field of 12 horses would cost more than $1300 - and you could lose almost all of that if the three horses with the lowest odds in the race finish 1-2-3.

So you still have to do your handicapping homework to narrow down the field.

As is always a good rule of thumb, start by eliminating the horses that you think have no chance at all of getting in the money, and then do your more in-depth analysis on the rest of the field. Look to get down to 5-6 horses that you want to play. You then have several options as to how to structure your tickets, but there are a couple basic startegies worth considering.

For example, of your 5-6 top horses, you can put your top 2 in all three positions (Win, Place and Show), and then add all the rest underneath in just the Place and Show spots. As a $1 trifecta on six horses, this ticket will cost $40 - a reasonable investment when the historic average payout on a $1 trifecta for the F&M Sprint is around $750. Of course, if you only put 5 horses on the ticket, the cost will be less, at $24.

If $40 is too much for your bankroll, another good way to structure a trifecta ticket around six horses is to leave your top two picks in the Win, Place & Show spots, put your next two choices in the Place and Show spots only, and your last two picks only to Show. For a $1 exacta, this will also cost you $24.

These are a couple of standard ways to put together a trifecta ticket, but the key is to look at how much of your bankroll you are comfortable betting in one race, and then structure your bet accordingly.