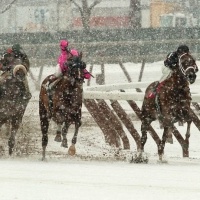 Located in Queen’s, New York, Aqueduct Race Track is so named due to its proximity with what was once the Brooklyn Waterworks pipeline, which brought water from eastern Long Island to a nearby resevoir. One of two tracks in the New York City area, Aqueduct is the home of winter racing in the state, with a schedule that typically runs from late October through to April. Aqueduct hosts a number of graded-stakes races through its meet, most notably the (G1) $1 million Wood Memorial Stakes one month prior to the Kentucky Derby.

As mentioned above, the Aqueduct Race Track race schedule runs through the fall, winter and early spring, with racing four days per week, on Friday through to Monday, with a post time of 1:20 PM. If you can’t get to the track, you can still wager with an account with these online racebooks.

Unlike most race tracks in North America, which typically feature one dirt course and one turf course, Aqueduct Race Track actually has three courses - a Main Dirt course (of 1 1/8 miles), an Inner Dirt course (1 mile) used for winter racing, and an inner Turf course (7 furlongs).

Due to this unique configuration, the inside courses have fairly tight corners, an important factor when it comes to handicapping Aqueduct races. Horse that can get out of the gate quickly have a bit of an advantage over slow starters, as they will be able to take a much better position on the rail going into the turns.

Horses that are slower out of the gate are always in danger of being "hung wide", particularly going into the first turn, and end up having to cover more distance during the race than horses that can get a rail position right away.

Slow starters are also in danger of falling far off the pace early and it is difficult to make up lengths on the tight turns, as there is less room for a horse to make an outside move on the final turn going into the stretch.

As for the actual racing events, for most three-year-old horses based on or near the East Coast, the road to the Kentucky Derby often runs through Aqueduct, as the track is home to three Derby qualifying races, with the (G3) Jerome Stakes run in January, the (G3) Gotham Stakes run in late February or early March, and the (G1) Wood Memorial run in April.

The Jerome Stakes is the second oldest stakes race in the United States and will be run for the 147th time in 2017. Over the years the distance of the Jerome has varied, and is currently run at a distance of 1 mile and 70 yards and carries a purse of $150,000.

Although in recent years the Jerome has failed to produce a solid contender for the Triple Crown series, in 2000 Fusaichi Pegasus won the race, subsequently capturing the Kentucky Derby as the first favorite to do so in 20 years.

The second Kentucky Derby prep at Aqueduct is the Gotham Stakes, which was first run in 1953. Just like the Jerome, the Gotham distance has varied over the years. It is currently set at 1 1/8 miles, with $300,000 in total purse money up for grabs.

Akin to the Jerome Stakes, the Gotham has failed to produce a top contender for the Triple Crown in recent years, but the record is improving. Easy Goer won the Belmont Stakes in 1989 and the great Secretariat won the Gotham Stakes before sweeping the 1973 Triple Crown.

The final and most important Aqueduct prep for the Kentucky Derby is the $1 million Wood Memorial Stakes, run at a distance of 1 1/8 miles. First run in 1925, the Wood has produced 11 Kentucky Derby winners and four Triple Crown winners, including Seattle Slew in 1977.

As an interesting historical note, after winning the Gotham Stakes, Secretariat finished third in the Wood before launching his successful Triple Crown bid. More recently, Frosted won the 2015 Wood and went on to finish fourth in the Derby and second in the Belmont Stakes, both times beaten by Triple Crown winner American Pharoah.

For 2017, the Wood Memorial Stakes will be run on Saturday, April 8.