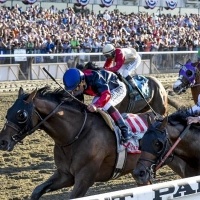 Located in Elmont, New York, Belmont Park Race Track has been in operation since 1905 and is world famous as the home of the Belmont Stakes, the third leg of the American Triple Crown of racing. Belmont features a main track for dirt racing, a turf course, and an inner turf course, and is well-known for its wide, sweeping turns and long final stretch. Belmont operates two race meets, the first from May into late July, and the second in October and November.

You can get Belmont Park Race Track free picks and race previews on all major Belmont races right here on Be A Better Bettor, and then make your wagers through one of these secure, recommended online racebooks.

Like so much that goes on in New York City, Belmont Park is home to some of the biggest and best thoroughbred races in the world, and all serious horse racing handicappers tune in to watch and wager on Belmont races. Not only does Belmont host the Belmont Stakes, it is home to other major Grade 1 races such as the Jockey Club Gold Cup, the Met Mile, the Joe Hirsch Turf Classic and many more.

The sheer size of the Belmont track - both dirt and turf - make handicapping races at Belmont a unique challenge and one of the keys to making winning bets on Belmont races is finding the horses that will take to the track surface, manage their speed and stamina and have something left in the tank for the long drive down the demanding home stretch.

Besides the Belmont Stakes, here's alook at some of the other major stakes races held at Belmont Park Race Track during the summer and fall meets.

Named for one of the best thoroughbreds in US racing history, the (G1) Man O' War Stakes is open to horses age four and older, and is run at 1 3/8 miles on the turf course, offering a total purse of $400,000. The first Grade 1 stakes race of the Belmont spring meet, the 2017 Man O' War will be held on Saturday, May 13.

Simply known as the "Met Mile" the (G1) Metropolitan Handicap is run on the dirt for horses aged three and older, and offers a total purse of $1.2 million. One of several graded-stakes to be run on Belmont Stakes Day, the 2017 Met Mile is set for June 10. The 2013 Belmont Stakes winner Palace Malice came back the next year to win the Met Mile, while 2015 Belmont runner up Frosted was the winner in 2016.

The main event for fillies on Belmont Stakes Day, the (G1) Acorn, is for three-year-old female runners, racing one mile on the dirt course for a purse of $1 million. It is known as the first leg of the Triple Tiara of US racing, the female counterpart to the US Triple Crown.

First run in 1979, the (G1) Belmont Oaks Invitational is for three-year-old fillies running 1 1/4 miles on the turf for a purse of $1 million. Typically held on early July, the race is a Breeders' Cup "Win and You're In" event for the Breeders' Cup Filly & Mare Turf. In recent years the race has been dominated by horses trained by Chad Brown, with four consecutive wins from 2012-'15.

Held on the same day as the Belmont Oaks, the (G1) Belmont Derby is open to all horses aged three, also racing 1 1/4 miles on the turf, with a purse of $1.25 million. In 2016, the Irish-bred Deauville shipped to Belmont Park and won the race, the first time he had tried racing on US soil.

Run during Belmont's fall meet, the (G1) Turf Classic has been a staple at Belmont since 1977, and the very first event was won by a horse named Johnny D., significant because his jockey was teenaged Steve Cauthen, who that spring had won the Triple Crown aboard Affirmed. Open to horses age three and up, the race is run at a distance of 1 1/2 miles, and carries a total purse of $500,000.

Also on the schedule for the Belmont fall meet, the (G1) Flower Bowl Invitational is for fillies and mares age three and up, run on the turf course at a distance of 1 1/4 miles for a total purse of $500,000. In addition to winning the Breeders' Cup Juvenile Fillies Turf in 2011, and the Breeders' Cup Filly & Mare Turf in 2015, the great Stephanie's Kitten is also a two-time winner of the Flower Bowl, hitting the wire first in both 2014 and 2015.