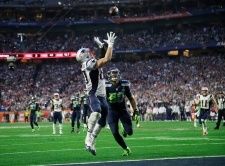 It’s never too early to put your money on Super Bowl 53. With an abundance of futures and proposition bets to select from the best NFL betting sites, placing your money on teams and players well in advance can result in huge paydays if everything falls into place. A year ago, who would have picked the Philadelphia Eagles to win Super Bowl 52 beyond the fiercely-loyal Eagles faithful, especially after quarterback Carson Wentz was lost for the season to a knee injury?

And yet, behind second-string QB Nick Foles, they went all the way to the first title in franchise history, beating the defending champion New England Patriots in the Super Bowl, with Foles outplaying Patriots QB Tom Brady and earning Super Bowl MVP recognotion.

Brady is a special player — possibly the greatest quarterback to ever play in the NFL. But now in his 40s, can the five-time Super Bowl shoot for a sixth ring? Oddsmakers with several online sportsbooks, including Bovada, don't rule out the Patriots, who captured their 10th successive AFC East title in 2018. While they might not be Super Bowl favorites this time around, they are still right there in the hunt, making the Patriots a legitimate championship contender once again.

As the NFL playoffs get underway, where is the smart money going to go in terms of Super Bowl 53 champions?

The Eagles are back in the hunt again, earning an NFC Wild Card berth on the final day of the season, but you have to go back to the Patriots and Super Bowls 38 and 39 to locate a Super Bowl winner defending its championship the following season. The Seattle Seahawks (Super Bowls 47 and 48) were the last NFC team to play in successive Super Bowls, and they lost the second time around after winning in their first visit to the big game. The last NFC team to win back-to-back Super Bowls was the Dallas Cowboys in Super Bowls 27 and 28.

Dallas is back in the hunt again this season after wrestling the NFC East crown away from the Eagles. But the Cowboys haven't been to the big game since Super Bowl 30. Are they worth a play? What about the Los Angeles Rams? They openend the season 10-0, but stumbled down the stretch and coughed up home-field advantage in the NFC to the New Orleans Saints.

The Kansas City Chiefs own the home-field edge in the AFC, but if you want to talk about Super Bowl droughts, the Chiefs are the poster boys. They haven't been back to the NFL title game since winning Super Bowl 4.

Now that you’ve had a moment to do a little research to find out which teams are true Super Bowl contenders, it’s time to make some early predictions regarding the Super Bowl odds.

Let’s start in the AFC, where the Patriots  are seeking to reach the big game for the fourth time in five years but this year, New England is not the obvious favorites to come out on top of the conference. That honor goes to the Chiefs, who posted the AFC's best regular-season record at 12-4, but did lose to New England, albeit on the road at Gillette Stadium.

Kansas City has a recent history of coughing it up in the postseason. The Chiefs are 1-11 in their last 12 playoff games, and on an 0-6 skid at home in postseason play. Kansas City's last home playoff victory was in 1993.

The Chiefs' last (and only) Super Bowl win came while the team was still in the AFL and the Patriots were still known as the Boston Patriots. Chiefs coach Andy Reid has never won the Super Bowl.

You could make a case for the 12-4 Los Angeles Chargers as legitimate threats in the AFC, but they drew the short straw in their Wild Card match-up when they pulled the AFC North champion Baltimore Ravens. The Ravens completely contolled the Chargers' powerful offense in a regular-season victory and will prove a tough out at home.

The Indianapolis Colts made an impressive charge to the postseason, going 9-1 after a 1-5 start, joining the 2014 Chiefs and 1970 Cincinnati Bengals as the only NFL teams to do this since 1970. But neither team made it past the Divisional Round of playoff competition. The Colts will face the Houston Texans in an all-AFC South showdown on Wild Card Weekend. Houston is another team that's never moved beyond the Divisional Round and the Texans have never wn a road playoff game.

Which brings us back to Brady, coach Bill Belichick and the Patriots. New England is like the villain in a slasher film. You think they're done, and they rise again. You just can't count the Pats out until they are counted out.

The Eagles have landed in the playoffs again, and once more Foles has rode to the rescue for the injured Wentz. Last year's Super Bowl hero is 4-0 as a starter this season. But the last reigning Super Bowl champ to make the playoffs as a wild card team was the 2010 Saints, and they didn't win a game.

The Seahawks are an intriguing team, one that sat 4-5 just past midseason before rallying to reach the postseason for the seventh time in eight years. Russell Wilson is a QB who finds ways to get it done, LB Bobby Wagner makes plays all over the field, but they'll be hard-pressed to win three playoff games on the road to get to the Super Bowl.

Chicago is back in the playoffs and much like the Bears' lone Super Bowl win in Super Bowl 20, they are led by a smothering defense, and have sprinkled in some fat guy touchdowns to invoke memories of William (The Refrigerator) Perry, the man who spawned the Super Bowl prop bet. But can you really back a team with Mitchell Trubisky at quarterback to win it all?

Two years ago, the 1-2 punch of QB Dak Prescott and RB Ezekiel Elliott got the Cowboys an NFC East title, and history repeated itself this season. Elliott led the NFL in rushing. But Dallas was just 3-3 against playoff squads.

Opening 10-0, the Rams were the darlings of the Vegas Super Bowl odds for most of the season, until they stumbled to the finish line. It invoked memories of the 1969 Rams, who opened 11-0 and never won another game.

The Saints own home field in the NFC and were 6-2 at home, losing in Week 1 and in a meaningless Week 17 affair. They whipped the Rams in New Orleans, and it was evident that day that whichever team gained home field was going to the Super Bowl.

The Super Bowl is the No. 1 sports betting day in the USA. Estimates from the American Gaming Association are that Americans bet approximately $6.8 billion on last year's Super Bowl game. Between 40-50 percent of that amount is wagered on the best picks among Super Bowl prop bets. There are game-related props, such as the result of Tom Brady's first pass, and there are event-related props, including the outcome of the coin toss.