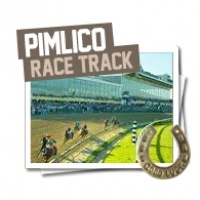 Pimlico Race Course is one of the oldest and most historic racetracks in the country. The track opened in 1870 and just a few years later hosted the inaugural edition of the Preakness Stakes which would become the second jewel of horse racing’s most coveted prize – the Triple Crown. Pimlico is located at the heart of Baltimore, Maryland and currently conducts live racing in May.Owned and operated by the Stronach Group, Pimlico has a one mile dirt oval and a seven furlong turf course. [+]

The infield has a large capacity for fans and on Preakness Day the track hosts a raucous infield party that rivals even the Kentucky Derby.

Even if you cannot make it to Baltimore to see the races at Pimlico Race Course in person, you can get in on the action while you are on the go through one of these recommended online racebooks. Utilizing an online racebook has numerous benefits including exclusive picks from Pimlico as well as rebates and promotions not found anywhere else.

Wagering on the races at Pimlico Race Course can be a challenge, particularly when there is an influx of top quality horses, jockeys and trainers. There was a longstanding myth that the turns at Pimlico Race Course were tighter than a usual one-mile oval’s turns would be. That is not true, however. Of course, it is always worth paying attention to how a track is playing on any given day and to look for any potential track bias that could develop.

It is always worth keeping an eye on jockey and trainer trends, particularly with many contenders at Pimlico coming from other tracks. Take note of who were the top local riders and trainers at Laurel Park, Pimlico’s neighboring track in Maryland, as those forms will likely translate.

Another tip when betting the races at Pimlico Race Course is, when focusing on the major stakes races, to be mindful of some of the history of the races and to watch for patterns.

The Preakness Stakes is one of the oldest and most historic races in the country. It is the second leg of the Triple Crown and is typically held two weeks after the Kentucky Derby at a distance of a mile and three-sixteenths. The purse is $1 million and it is a Grade 1 race for three-year-olds.

Throughout the history of the Preakness Stakes, five fillies have defeated male rivals, most recently Rachel Alexandra in 2009. The largest margin of victory was by Smarty Jones in 2004 who romped by 11 ½ lengths. The stakes record was set in 1973 by the great Secretariat who stopped the clock in 1:53.00.

The Dixie Stakes is the longest-running stakes race at Pimlico and was inaugurated in 1870. It is called the “Dinner Party Stakes”.  In fact, the winner of the first Dixie Stakes was Preakness. This race was eventually named after that particular horse.

Currently, the Dixie Stakes is run at a mile and an eighth on the turf and has a purse of $250,000.  The race routinely attracts some of the top turf trainers in the country and has been won in recent years by Chad Brown, Jonathan Shepphard and Shug McGaughey. Now retired, jockey Ramon Dominquez has the record for the most wins – he piloted home five winners from 2003-2010.

Held traditionally on the day before the Preakness Stakes, the Black Eyed Susan Stakes is designed to be the equivalent race for fillies though, as history has shown, fillies have been successful against the boys in the Preakness Stakes as well. The Black Eyed Susan Stakes was inaugurated in 1919 and currently holds Grade 2 status and a purse of $250,000. It is contested at a mile and an eighth on the main track.