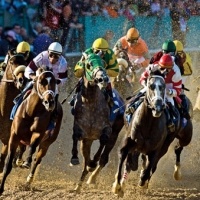 As all states in the United States and provinces in Canada set their own laws in regard to gaming, there are some jurisdictions where off-track betting (OTB) facilities are not available, and the state of Arkansas is one of them. In Arkansas, there are only two places to bet on horse racing, live and through silmulcast wagering at Oaklawn Park and Gaming in Hot Springs on the west side of the state, and on simulcast races at Southland Park Gaming and Racing in West Memphis on the eastern side of the state.

Since there are no OTBs in Arkansas, and only the single race track located in Hot Springs, horse racing fans in Arkansas that want to bet on the biggest stakes races are best served by an online racebook. Check out some of our best recommended racebooks below.

First opened for racing in 1904, Oaklawn Park is known as the home of the “Racing Festival of the South” including the $1 million Arkansas Derby, which is scheduled to be run on April 15. Oaklawn holds its live racing meet from mid-January to mid-April, on Thursdays through Sundays, with an afternoon post time of 1:00 PM on Saturday, and 1:30 PM on all other days.

In addition to live racing, Oaklawn is open every day of the year for fans to wager on simulcast racing from other tracks around North America. The track simulcast facilities open at 11:00 AM and remain open until 3:00 AM Sunday through Thursday, and until 6:00 AM on Friday and Saturday. For gaming, Oaklawn offers live and video poker, Blackjack, roulette and other table games.

Southland Park is actually a greyhound racing facility, but does also offer horse race wagering from tracks in North America and overseas as part of its simulcast package. Southland Park is open 24-hours-a-day, seven- days-per-week. Their gaming rooms feature video and live poker, slots, Blackjack, roulette and others.