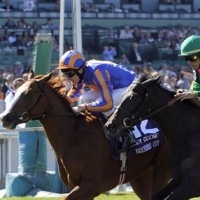 All of these highly recommended online racebooks will offer Breeders’ Cup Juvenile Fillies Turf odds for wagering, as well as sign-up, cash back and other bonuses, and other horse racing promotions that help to add to the return on your wagering dollar.

Also, just like the Juvenile Turf, only one favorite has won the Juvenile Fillies Turf, that being Lady Eli, when she won at odds of 2-1 in 2014.

Differences Between the Fillies and Colts

There are, however, some significant differences. The Juvenile Fillies Turf has produced double-digit Win payouts four times over the nine years, twice as many as the Juvenile Turf, which has had one more race.

Since the race was first run in 2008, the favorites for the Juvenile Fillies Turf have finished in the money only four times in 10 starts, with one winner, two second-place finishes, and one third-place finish, translating to an in-the-money percentage for favorites as only 44%. This past year, UK invader Happily went off as the favorite at 5-2 but finished dead last in the field 14 runners.

That is significantly lower than the 70% for the Juvenile Turf, and below the accepted norm of 67%.

These factors combine to demonstrate the Juvenile Fillies Turf is historically one of the most wide-open races in the Breeder's Cup, and while this makes it a tough race to handicap, it can also provide for some very lucrative payouts if you get it right.

So how to handicap the Juvenile Fillies Turf?

Of course, this all depends on what past performance results have to say about that favorite and how strong she is against the rest of the field.

Prep Races are a Key Factor

Seven of the past winners had won their prep race prior to the Breeders' Cup - including Rushing Fall in 2017, who was actually two-for-two in her young career - and two others had finished second. What is perhaps even more interesting from a handicapping point of view is where they had won or prepped for the race.

While it's true that there are a limited number of turf races for two-year-old filllies in North America, of the seven North American-based Juvenile Fillies winners four prepped for the Breeders' Cup by running the (G3) Miss Grillo Stakes at Belmont, with three winners and one runner-up finish.

Three others had prepped in the (G2) Natalama Stakes at Woodbine, with a win, a second-place finish and a third-place finish among them (note the third-place runner, Stephanie's Kitten, ran once more prior to the BC by winning the (G1) Darley Alciabides Stakes at Keeneland).

Rushing Fall forged a slightly different path to her BC win, previously taking the (G3) Jessamine Stakes at Keeneland.

Clearly, however, the former two races are very important tune-ups to the Breeders' Cup Juvenile Fillies, and when analyzing the past performance information, a start and a good result in either of these two races needs to be given serious weight.

North American Based Fillies Have the Edge

In 2017, half the field were European-based fillies, but fillies from North America ran first and second, and claimed three of the top four places overall. This difference could simply come down to the fact that far fewer turf-racing juvenile fillies have shipped over to run in the Breeders' Cup than have juvenile turf colts. However, the dominance of North American-based runners in the race should be taken into consideration when handicapping the race.