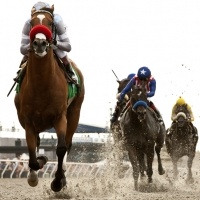 The Breeders Cup current Dirt Mile odds above are from the best online bookmakers available to US players.

As something of a specialty distance - not quite a route and not quite a sprint - and given that only one horse has ever repeated as two-time champion of the Dirt Mile (Goldencents 2013-'14), the race is often a fairly wide-open affair, and this is reflected in the average winning odds over the past 11 years of right around 11-1. The 2017 Dirt Mile results fit right in with this average, with Battle Of Midway winning at odds of 14-1.

In the 11 runnings of the race, the favorite has only won twice, and the first of those wasn't until Goldencents claimed his second title in 2014 The second was the very next year when the race was won by Liam's Map. The 5-2 favorite in 2017, Mor Spirit, ran eighth, while Sharp Azteca, the 3-1 second choice was runner-up.

Otherwise, the race has provided decent betting value, with five winners in double-digit odds, including 21-1 Furthest Land in 2009, and 38-1 Dakota Phone in 2010.

Given this historical background, the race sets up as a handicapper's favorite, with typically several horses having a fair shot at winning with odds that can provide a solid return on investment, with $2 exacta payouts ranging from $100 to $800 in the eight years the favorite didn't win the race. The Battle Of Midway - Sharp Azteca exacta this year returned $164.20 on a $2 bet.

Looking at a handful of the most recent winners, only Goldencents looked like a lock heading into the BC Dirt Mile. Prior to his first win, he was second in three straight Grade 1 or Grade 2 races, and had been a participant in the Triple Crown series, finishing fifth in the Preakness Stakes. Prior to his second win, he was in a similar pattern, with a Grade 1 win and three other second-place finishes in Grade 1 races leading up to the Breeders' Cup. This form put him ahead of the competition, and he proved he deserved his leading-contender status by winning the races.

For some of the other recent winnners, however, their performances leading up to the Dirt Mile were more inconsistent.

Tamarkuz, for example, came into the 2016 Dirt Mile on a six-race winless streak, including a ninth-place finish in the (G1) Metropolitan Handicap, and a sixth-place finish in the (G1) Forego Stakes. Just prior to the Breeders' Cup, however, he had run second in two straight races, including the (G2) Kelso Handicap, where the winning time was less than a second off the track record. That's a sign he was in excellent form going into the Dirt Mile, and was potentially sitting in a big race.

In similar fashion, Tapizar went into the 2012 Dirt Mile off a sixth-place finish in the Kelso. But a closer look at the running line information for the race indicated that he was bumped by other horses shortly after the break (nearly losing his jockey) and had to hustle hard to try and catch the leaders. Making matters worse, he is a horse who wins when he gets out of the gates quickly. That effort tired him and he faded when they hit the stretch.

However, if you look at the race prior to the Kelso, you'd see that he won the West Virginia Governors Handicap in his first race after a five-month layoff. In the race he showed a lot of speed to get the lead early but was actully headed by another horse at the 3/4 mile mark. He fought back to retake the lead and won going away by more than four lengths. That's the race a handicapper would key on as as an indication of how he might run in the Breeders' Cup.

In hindsight, Battle Of Midway for 2017 was a fairly large overlay based on his past performance, as he finished in the top three in eight of his previous nine races, with four wins, including running third in the 2017 Kentucky Derby.

All of this goes to show the importance of reading and understanding the past performance information when making bets on races like the Breeders' Cup Dirt Mile.