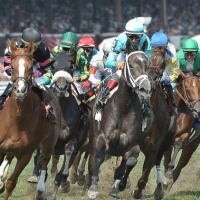 Located in Saratoga Springs, New York, Saratoga Race Track – also known as Saratoga Race Course, or simply “The Spa” – was first opened in 1863 and is one of the oldest continuously operating sporting venues in the United States. Saratoga features a main dirt track, a main turf track and a smaller, inner turf track. Saratoga holds a summer race meet that generally runs from late July to the first weekend of September, and features a number of graded-stakes races including the (G1) Whitney and (G1) Travers Stakes.

All of the best online racebooks offer handicapping information including Saratoga Race Track free picks, as well as track odds, multiple wagering type options, and cash back and other bonuses.

As one of the most historic race tracks in the United States, which features a summer race schedule that includes some of the biggest graded-stakes races of the year, Saratoga Race Track is something of a mecca for horse racing fans in North America. From late July through to Labor Day weekend, Saratoga hosts daily racing, on both dirt and turf, featuring 35 graded stakes races, including 15 Grade 1 races.

Saratoga is also known for their annual Fasig-Tipton auction of young horses held every summer during the race meet, which brings together some of the biggest racing stables, owners and trainers to purchase the next crop of racing champions.

Fans of horse racing should definitely keep track of Saratoga’s stakes schedule to catch some of the best bets of thoroughbred horse racing in North America.

Traditionally the kick-off event to the major stakes season at Saratoga, the (G1) Whitney is usually run in late July or early August. For horses three years and older, the Whitney is run at a distance of 1 1/8 miles over the dirt track, and offers a purse of $1.25 million. As part of the Breeders’ Cup ‘Win and You’re In” series, the Whitney winner gains an automatic starting spot in the Breeders’ Cup Classic. In 2012, Fort Larned won the Whitney and went on to win the BC Classic at odds of 9-1.

Despite its name, the (G1) Alabama Stakes has been run at Saratoga since 1882, and is currently open to three-year-old fillies, racing 1 1/4 miles on the dirt for a purse of $600,000. One of the few races in North America run at the “classic” distance for fillies, the Alabama is considered the third and final leg of the US Triple Tiara – the female equivilent of the Triple Crown. The Alabama is usually held in mid-August.

Open to three-year-old horses sprinting seven furlongs on the dirt, the (G1) King’s Bishop Stakes has been on the race schedule at Saratoga since 1984, and currently offers a purse of $500,000. In both of the past two years, the winner of the King’s Bishop (Runhappy in 2015 and Drefong in 2016) have gone on to capture that year’s Breeders’ Cup Sprint race.

Run over 1 1/2 miles on the Saratoga main turf course, the (G1) Sword Dancer Stakes is one of the premier turf events in the United States for horses aged three and older, and offers a purse of $1 million. Considered a major prep race for the Breeders’ Cup Turf, the race is run in mid-August, and in 2014 Main Sequence won the Sword Dancer and then went on to capture the BC Turf.

For fillies and mares age three and older, the (G1) Personal Ensign is run at a distance of 1 1/8 miles on the dirt for a current purse of $750,000. The race was run under several different names since its inception in 1948, and in 1997 was named after the undeafeated Hall of Fame mare Personal Ensign. It’s considered a major prep for the Breeders’ Cup Distaff, and two-time Distaff winner Royal Delta won the race in 2011.

The feature race of the Saratoga summer racing meet is held in late August. The (G1) Travers is often referred to as the Summer Derby in reference to the Kentucky Derby, which is held in early spring.

Open to horses aged three and older, the Travers often marks the first time horses that have competed in the Triple Crown series for three-year-olds go up against the best older horses. The Travers is run at a distance of 1 1/4 miles on the dirt and offers a purse of $1.25 million.

The winners’ list for the Travers includes some of the most successful horses that have ever raced, including Kentucky Derby winners such as Thunder Gulch (1995) and Street Sense (2007), as well as 2016 Breeders’ Cup Classic winner Arrogate.