How to Bet on Brighton & Hove Albion 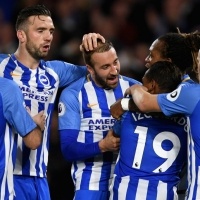 Brighton & Hove Albion, also known as The Seagulls or simply Brighton, are an English premier League team who play their home games at the American Express Community Stadium, or simply the Amex.

Founded in 1901, Brighton has spent the majority of its time outside of English soccer’s top flight, although they did enjoy some prominence between 1979 and 1983 when they played in the old First Division and reached the 1983 FA Cup final; they were relegated during the same season.

The club almost ceased to exist in its present form because it faced relegation out of the Football League in 1997. Brighton managed to avoid being relegated and a boardroom takeover saved the club from being liquidated. Back-to-back promotions in 2001 and 2002 put Brighton in the second tier before they returned to the top flight, the Premier League for the 2017-18 season, after an absence of 34 years.

A 15th place finish was achieved during Brighton’s first season back in the Premier League and they finished seven points above the relegation zone, thanks in part to beating the likes of Manchester United and Arsenal.

Brighton supporters do not expect their team to be challenging for honors any time soon. They realise their club operates on a far smaller budget that some of its Premier League rivals. While Brighton lack players with star quality, they are a hard-working team who are difficult to beat, especially at home.

Who Do Brighton Play Next?

Who are Brighton’s next opponents? Will The Seagulls have home advantage or are they the away side? Learn this and more, including the recent form of both teams, via our handy fixture widget.

The Premier League has a gruelling 38-game schedule that sees teams travel the length and breadth of the country. It is worth checking the Brighton schedule before you place any bets on them. Look at the team’s current form and check what the upcoming fixtures are in case the Brighton manager decides to rest key players for an important fixture on the horizon.

Where Are Brighton in the Premier League Standings?

A soccer team’s position in the standings can and does have a major influence over the betting odds offered on them winning, drawing or losing. Also, knowing where the team’s opponents are in the league table gives you some indication on how the match will pan out.

Check out where Brighton are in the current standings, including home and away tables plus where they’d stand if based on first half and second half performances and use this information to place a profitable bet on Brighton’s games.

How to Bet Profitably on Brighton

Brighton & Hove Albion are extremely unlikely to be challenging for a place in the top half of the table during the next few years as they are trying to simply establish themselves as a Premier League team.

Their owner, Tony Bloom, is an astute business man who is not prepared to risk the future of Brighton for the sake of chasing glory.

Brighton’s home form is what secured their Premier League status during the 2017-18 season. Seven of Brighton’s nine victories came when they were playing at home, so bear this in mind when betting on Brighton.

Do not expect Brighton’s games to feature many goals. The team only managed an average of 0.89 goals per game last season, although they only conceded an average of 1.42 goals per game too. Some 25 of Brighton’s 38 games ended with under 2.5 goals and the Seagulls failed to score in 17 of their fixtures, although half of the games they competed in, keeping only 10 clean sheets in the process.

Glen Murray is Brighton’s biggest goal threat and he finished last season with 12 Premier League goals. Murray is now 35-years old and is unlikely to play the full 90-minutes of man of Brighton’s games this season.