How To Bet On Buffalo Sabres 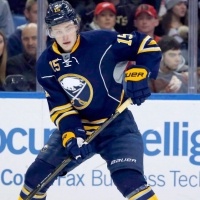 After seven long years of existing in or around the gutter, the Buffalo Sabres are back in a big way.

Very few teams rival their offensive depth, and they've assembled a scrappy defensive attack that holds up against even the fastest teams. Their place in the NHL, and more specifically, the Atlantic Division, is no longer up for debate.

They're among the best squads in the league, bar none, and this should be the season their seven-year playoff drought is finally snapped.

Who knows, if star players Jack Eichel and Jeff Skinner continue amassing points in career volume, the Sabres might just have the firepower to become one of the most unexpected Stanley Cup victors in recent memory.

Keep an eye on who the Sabres battle next and make sure to do all of the background research for placing your wager. This includes checking up on previous matchups between them and their next opponent. It also consists of monitoring the injury reports. Any noticeable absences should impact how you view the game, even before the lines are officially released.

Use the Sabres' entire regular-season schedule to help you plan ahead on some of your betting practices. Lines won't be available for games that take place weeks and months into the future, but you can look for opportunities in their opponent lineup, in addition to any problematic stretches.

Some of the more favorable circumstances include long home stands and a bunch of upcoming games against opponents below .500. More difficult spans will include multigame road trips, back-to-backs, stretches of four tilts in five nights and a string of matchups versus teams with winning records.

Buffalo's full schedule is also useful to keep tabs on their momentum. That's a real factor in sports betting. You have the ability to see how the Sabres have fared over the past few weeks or even months. If you see that they've been particularly hot or especially cold for a significant period of time, make sure you're structuring your bets—or your decisions to avoid Buffalo altogether—accordingly.

If the Sabres are a worthwhile futures option, it will be reflected in the standings.

As of now, we can see that they're neck and neck with some of the juiciest Stanley Cup Finals candidates. They're within striking distance of the Maple Leafs, Lightning, Washington Capitals, Nashville Predators and all the usual suspects.

That's your cue to take a deeper dive into their championship odds. It doesn't make them a foolproof bet; there are better options. But the Sabres are also one of the eight to 12 best teams you could possibly invest in during the 2018-19 season.

Keep this tips as mind as you consider what bets to place on the Sabres this season.

The hardest thing to do in the NHL is excel at both ends of the ice. Most teams have specialty identities. They're either great offensive teams or great defensive teams while sacrificing in the remaining area.

This isn't news. Talented rosters are expensive to build. Franchises can often only afford to cater to one side of the ice. They will purposely leave voids elsewhere to make it work.

Every year, however, there are a handful of teams the flirt with elite placement on both offense and defense. This season, the Sabres are one of them.

Buffalo is one of just four teams to place in the top 10 of both goals scored and goals allowed. Their company? The Maple Leafs, Predators and Colorado Avalanche, all of which are considered genuine Stanley Cup contenders.

That's a big deal. Balanced teams tend to own the regular season. The Sabres are no different. They are covering a robust 58.3 percent of their games overall and roughly 73 percent of the games they play at home. They need to get their act together on the road, but even there, they're covering nearly 50 percent of their spreads.

Are The Sabres Stanley Cup Contenders?

As if the previous section didn't already give it away, right?

The Sabres should absolutely be in your Stanley Cup mix. Above-average performances on both sides of the ice are hallmarks of the championship discussion, and Buffalo fits that mold.

Hockey-Reference's Simple Rating System, which uses strength of schedule and point differential to effectively rank teams, has the Sabres as the eighth-best team. And that standing will only improve if they start stealing a game here and there while playing outside Buffalo.

Some will still be reluctant to trust the Sabres. After all, it's been so long since they resided near the top of the league. But this performance is not some aberration. The Sabres are for real.

A losing streak wouldn't change this. The Sabres could simply talent their way to a postseason appearance if all else fails.

They have a hodgepodge of studs in Jack Eichel, Jeff Skinner, Sam Reinhart, Jason Pominville, Rasmus Dahlin and Casey Nelson. Most teams would kill to have even two of those guys on the same roster. Buffalo has all six.

Sportsbooks, of course, are starting to catch on. The Sabres began the season as +10000 to +8000 Stanley Cup options. They're now closer to the +5000 marker in most places.

This is still good value for them, but it shouldn't last forever. It's won't be long before you see them picking up +3500 or maybe +2800 returns. Now is the time to invest in them if you're looking to capitalize on underdog odds.

Look below for the top sportsbooks so you can see where you can wager online and figure out which is best for you: