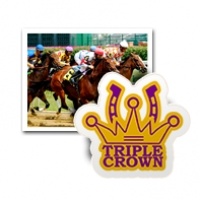 When Justify hit the finish line first in the 2018 Belmont Stakes, he became just the thirteenth horse in 100 years to win the United States Triple Crown of racing. Comprised of the Kentucky Derby, the Preakness Stakes and the Belmont Stakes, the Triple Crown series tests horses at three different distances over the course of five weeks, and is the most important series of horse races in the United States for the horses, trainers and racing fans.

Of the more than 20,000 thoroughbred horses born in the US each year, only 20 will make the starting gate of the Kentucky Derby, and thus have a chance to win the Triple Crown. Many horses are nominated at birth to race in the series, and then their owners must wait three long years to find out if they will actually be good enough to make the field.

Most horses begin racing in the summer or fall of their second year, and from that point over the next six-to-nine months the results of their races will determine which ones are Triple Crown contenders.

Although all three races were first run in 1875, it took until 1919 before a horse named Sir Barton was able to capture all three. The term “Triple Crown” didn’t actually come into common use until the 1930s, and it was not until the 1980s that the owners of the three Triple Crown race tracks – Churchill Downs, Pimlico Race Course and Belmont Park – began working together to promote the series as a singular event.

Although the 2019 Triple Crown doesn’t get underway until the running of the Kentucky Derby on the first Saturday in May, horseplayers start looking for contenders months ahead of time. The winner of the Breeders’ Cup Juvenile race in November, for example, is always considered an early Triple Crown contender.

The race that kicks it off, the Derby is the most important race of the Triple Crown, since obviously only the winner of the Derby can become a Triple Crown champion.

The Derby is run on the Churchill Downs dirt track at a distance of 1 1/4 miles, which has come to be known as the "Classic" distance in US horse racing. The Derby offers a total purse of $2 million, with just over $1.4 million of that going to the winner.

The Derby is limited to a field of 20 horses, and these are determined through a series of qualifying races (known as "prep" races) that take place beginning in the summer prior to the race when the horses are in their two-year-old racing season.

Typically any one horse will run in three or four of the qualifying races to try and accummulate points. While every year the points needed to make the field will vary, it usually takes around 40 points to get in.

For racing fans, the key to betting the Triple Crown is to pay attention to the prep race series and make note of which horses are accumulating points and starting to emerge as real contenders.

The second jewel in the Triple Crown, the Preakness Stakes is slightly shorter than the Derby at 1 3/16 miles. It is run on the Pimlico dirt track and offers a total purse of $1.5 million, with $900,000 going to the winner.

Since most top race horses will usually run a race every four to five weeks, the two-week turnaround from the Derby to the Preakness is a tough test in itself.

Limited to 14 starters, the Preakness always includes the winner of the Kentucky Derby, and usually a few other horses that have run in the Derby and even if they didn't win, ran well enough to convince their owners and trainers to take a shot at winning the Preakness.

There will also typically be a handful of new horses in the race, quite often some of those that didn't quite accumulate enough qualifying points to make it into the Derby starting gate.

Also known as "The Test of the Champion", the Belmont comes just three weeks after the Preakness, and is considered the toughest of the three races since it is run at the longest distance of 1 1/2 miles on the Belmont dirt - further than most of the horses will likely be asked to race again in their career.

Of course, the Belmont will include any horse that won the first two jewels of the Triple Crown, as well as several horses that perhaps ran in the Derby and skipped the Preakness, and other horses that have been in training specifically for the Belmont.

In 2018, only Triple Crown winner Justify and one other horse named Bravazo ran in all three Triple Crown races.

The 2019 Belmont Stakes will be held on Saturday, June 8.