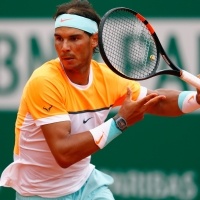 In 2004 a new tennis rivalry was born when Roger Federer and Rafael Nadal clashed for the very first time at the Miami Masters. Federer had been on the ATP circuit for a few years while a clean-cut Nadal — just 17 years old at the time — surprised many by taking out the Swiss superstar in the third round in straight sets. What the tennis world may not have known at the time was that first meeting would become the start of the greatest rivalry the sport has witnessed since the Andre Agassi-Pete Sampras era. [+]

Nadal is the greatest clay-court player in the history of the sport and the same can be said about Federer when it comes to competing on grass as he is tied for the most Wimbledon crowns with seven.

Nadal holds the edge in the 13-year-old rivalry, posting an overall record of 23-14. Of their 37 career matches against each other, 19 have been on hard court and 15 on clay — a surface Nadal has ruled throughout his career.

The first major the two tennis legends clashed in happened to be the 2005 French Open at Roland Garros. If there was any doubt up to that point, Nadal made a name for himself by ousting Federer in four sets en route to capturing his first of nine French Open championships. Federer would get his revenge in their second major meeting — taking down Nadal in the 2006 Wimbledon final.

The last time the two tennis superstars clashed in a major was at the 2017 Australian Open. Federer and Nadal battled to a five-set thriller before the Swiss Meastro added his 18th career major with a victory.

Is anyone better all time?

Rafael Nadal may own the better head-to-head record, but when it comes to who the best tennis player in the world is, Roger Federer is The Guy.

There was once a time when it looked as if Pete Sampras’ 14 total major championships, seven of which at Wimbledon would never be touched. Then Federer turned pro in 1998 and everything changed. In 2009, at the age of 27, Federer defeated Andy Roddick in an epic Wimbledon final to claim his 15th career major and officially pass Sampras on the all-time list.

Federer made his way up the ranks, winning countless tournaments and eventually spent 302 weeks at the top of the ATP rankings as the world No. 1 player — including 237 consecutive weeks — the most of any player in history. Nadal last held the No. 1 ranking from October 2013 to July 6, 2014, for a total of 39 consecutive weeks. Overall, Nadal held the top spot for 141 weeks.

Federer and Nadal have certainly set the standard over the last decade. But are there any other players that compare with the two Hall of Fame tennis stars?

Consider this rivalry of Sampras vs. Agassi 2.0. For years the world was treated to the rivalry between the two, with Sampras usually getting the best of his American counterpart. However, much like Nadal and Federer, both Sampras and Agassi had different styles. Pistol Pete was known for his blistering serve and net-court presence, while Agassi could drive opponents bonkers with his extraordinary serve return.

One player that may pass Nadal for second overall on the all-time majors list is Novak Djokovic. The Serbian is at 12 major titles — two behind Nadal’s 12.

However Federer changed the game at a time many believed it had reached peak. The argument can be also made that Federer faced stiffer competition with the likes of Nadal, Djokovic and Andy Murray — which only strengthens the fact that Federer is the greatest of all time.

The rivalry between Federer and Nadal will live on up until the day either one decides to hang up their tennis shoes. Until then, enjoy the battle that has brought so much entertainment throughout the years.

But Federer is, and always will be, the guy.