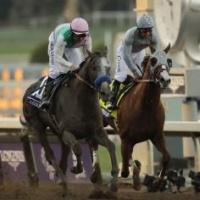 Along with Kentucky and New York, California is one of the best states in the US to experience horse racing and outside of going to the track, racing fans can bet on horses at close to 30 different California off track betting (OTB) locations. OTBs in California are something of a mixed bag of pubs, restaurants and stand-alone betting parlours, and span the state from north to south. Check the California Horse Racing Board website for the latest information on OTB locations and contact information, as well as information on live racing.

California off track betting sites offer simulcast wagering on live races from California state tracks as well as tracks from elsewhere in North America and aroudn the world. But if getting to an OTB to bet a big race isn’t feasible, you can still get in on the action with an account at one of these excellent online racebooks.

In addition to numerous OTB locations available for fans to bet the races, there are also four privately owned California horse race tracks that offer live and simulcast racing. These include Santa Anita, Del Mar, and Los Alamitos race tracks in southern California, and Golden Gate Fields in northern California.

Located in Arcadia, California, and also known as "The Great Race Place", Santa Anita was first opened in 1934, and these days is well known to race fans around the world as the nine-time host of the Breeders' Cup World Championships. Santa Anita has a one-mile dirt course and a seven-furlong inner turf course, as well as a second "downhill" turf course that is unique among North American race tracks.

With the closure of Hollywood Park in 2014, Santa Anita was able to extend its racing season, and now holds racing from late October through to July. As one of the premier racing facilities in the country, Santa Anita is host to numerous major stakes races, with 20 Grade 1 stakes races alone, including the Santa Anita Derby, the Santa Anita Handicap (also known as The Big 'Cap), the Gold Cup at Santa Anita, and more.

The official name of the Del Mar Race Track, the Del Mar Thoroughbred Club was first opened in 1937, and was founded by a group of Hollywood celebrities led by Bing Crosby and Gary Cooper. Located in Del Mar, just outside of San Diego, the track goes by the slogan "Where the Turf Meets the Surf".

Del Mar has a one-mile oval dirt track with chutes to hold seven-furlong or 1 1/4 mile races, as well as a seven furlong turf course with chutes to extend turf races to either 1 1/16 or 1 1/8 mile races. As with Santa Anita, Del Mar chose to extend its racing season after the closure of Hollywood Park, and now holds two meets, a summer meet from july through to September, and second short fall meet in November and December.

In addition to the $1 million Pacific Classic Stakes, Del Mar hosts a handful of other Grade 1 stakes races, including the Del Mar Oaks, the Bing Crosby Stakes, and the Clement J. Hirsch Stakes, one of the the premier turf stakes in the US.

Located in Berkeley, California, near San Francisco, Golden Gate Fields was first opened for racing in 1941, although it was then promptly taken over by the US Army as a storage facility for the duration of World War II. Golden Gate has a one-mile synthetic main course (one of the few tracks in North America to employ a synthetic surface) and a seven-furlong turf course.

Founded in 1951 in Orange County, California, Los Alamitos is known as one of the top Quarterhorse (racing a straight 1/4 of a mile) tracks in the United States, although the track does also host thoroughbred racing on a five-furlong oval. Perhaps Los Alamitos most famous son is Triple Crown winning trainer Bob Baffert, who got his start racing Quarterhorses at the track. It is also known as the home track of 2014 Kentucky Derby and Preakness Stakes winner California Chrome.

Los Alamitos is somewhat unique in that most of its races are held at night, although it does also offer a short daytime thoroughbred meet in the summer. The track also hosts racing during the Los Angeles County Fair in September and then again in November/December. While Los Alamitos doesn't host any major thoroughbred stakes races, it does hold four different $1 million or more races for Quarterhorses, including the $2 million Los Alamitos Futurity, the richest Quarterhorse race in the world.