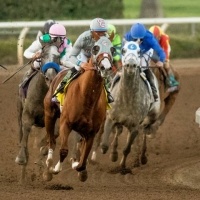 You can find the both the future bet Breeders' Cup Classic betting odds as well as the morning line odds at the track on the day of the race posted on any of these top-rated online wagering sites.

From the very first Breeders' Cup Classic, which resulted in a three-horse photo finish, the race has produced some fantastic runs by both favorites and longshots. Looking at the results over the past 10 years is the best way to provide helpful Breeders' Cup Classic betting tips.

So while the BC Classic has produced some huge payouts, with Arcangues in 1993 setting the Breeders' Cup payout record when he pulled a shocking upset at 133-1, the Classic winner has more typically been among the favorites or at least in single-digits in the odds.

How Often Does The Favorite Win?

However, the actual race favorite has only won two of the past 10 races, those being American Pharoah in 2015, and the superstar mare Zenyatta in 2009.

This trend continued for 2017, with race winner Gun Runner only the second choice in the betting at post time behind defending champ Arrogate.

Speaking of Zenyatta, she is the only filly or mare to win the race, and the only horse to win two seperate Breeders' Cup events, as she won the 2008 BC Distaff (or Ladies Classic, as it was known then) and then the 2009 Classic running against males.

Arcangues, meanwhile, was bred in France, and remains the only European-bred to ever win the Classic (it's remarkable that the 1993 BC Classic was his first start ever on dirt), and one of only three non-US breds to win the race, with Invasor (Argentina, 2006) and Awesome Again (Canada, 1998) the others. Raven's Pass, the 2008 winner, is a somewhat unique Classic champion in that he is a Kentucky-bred horse that had done all his running in his previous 11 races in Europe, and like Arcangues, the BC Classic was his first race on a dirt surface.

Going back to the analysis of some of the important numbers at play over the past 10 years of the Classic, the margin of victory averaged just over 1 1/2 lengths, a number that is slightly skewed by American Pharoah's record-setting 6 1/2 length victory in 2015. With the exception of that race, and perhaps Curlin's 4 1/2 length win in 2007, the BC Classic has produced some extremely close finishes, with two races in the past decade decided by a nose, one other by a neck, and two more by a half-length.

Gun Runner's 2017 win fits right in with this profile as well, as he was clear of the field by 2 1/4 lengths at the wire.

As for pre-BC Classic form, perhaps one of the most significant handicapping notes is that six of the past 11 winners had won their last race prior to winning the Classic, four others finished in second, and one, Fort Larned in 2011, had been third. This past year Gun Runner came into the race on a three-race winning streak. In other words, all these winners were shown to be in peak form going into the race, as indicated by their most recent results in their final tune up before the big race.

It should also be noted that four of the eleven last winners used the Jockey Club Gold Cup at Belmont Park as their final prep race before the Classic, with one winner, two second-place finishes, and one third-place finish in that race.

For two of the past three years, the BC Classic winner has come out of the Travers Stakes at Saratoga, with Arrogate having won that race, and American Pharoah finishing second in 2015, upset in the final strides by Keen Ice, who would then finish third in the 2015 Classic. Gun Runner's last tune-up was a win in the Woodward Stakes at Saratoga.