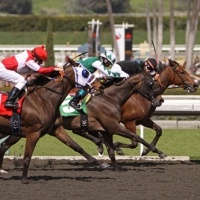 Known as the “Test of the Champion”, the Belmont Stakes is run every year at Belmont Park Race Track as the third and final leg of the US Triple Crown. Run at 1 1/2 miles on the dirt track, the Belmont is open to horses age three and offers a total purse of $1.5 million. Held five weeks after the Kentucky Derby and three weeks after the Preakness Stakes, the 2022 Belmont Stakes will take place on Saturday, June 11.

You can get Belmont Stakes odds, multiple wagering options, handicapping tips, race results and cashback, first deposit and other bonuses if you open an account and bet the race with one of these online wagering platforms. The Belmont Stakes betting odds were last updated on May 30, 2022:

When American Pharoah won the Belmont Stakes in 2015 to become the first horse since 1978 to win the Triple Crown, it was of the easiest Belmont Stakes predictions to make in years. As shown by his domination in the Kentucky Derby and Preakness Stakes, American Pharoah was clearly the best of the three-year-old crop in North America that year, and short of suffering some sort of injury, his Belmont win was as close to a sure thing as you'll ever see.

So what about other recent Belmont winners, and what can we find in their past performances to indicate they were ready to take the win when the gates opened for the Belmont?

After reeling off three wins in four starts - including the (G2) Tampa Bay Derby by more than four lengths, Tapwrit's form appeared to fall off for his next two starts. He ran very poorly to finish fifth in the (G2) Blue Grass Stakes, and then, like several others, had a tough trip on the sloppy Churchill Downs track to run sixth in the Kentucky Derby.

However, unlike several others, despite starting far back and having to get through trouble, he was one of few horses in the 2017 Derby to make steady forward progress throughout the race, suggesting he ran much better than the final result would indicate.

He then skipped the Preakness and came back fresh for the Belmont. His pedigree suggested he would have no problem getting the 1 1/2 mile distance, and jockey Jose Ortiz gave him an excellent ride, tracking off the leaders through the early part of the race and keeping plenty in reserve to surge to the front as they came down the long Belmont final stretch.

It was the third Belmont Stakes win in four years for a colt sired by Tapit, and in a race where being able to handle the long distance is always a question mark for most horses, pedigree proved to be a key handicapping angle.

Creator had taken a shot in the Kentucky Derby and only managed to run 13th. He was in close quarters out of the gate, settled off the pace near the back of the packn and started to make his run as they came off the last turn.

He was bumped hard by another horse, almost had to come to a complete stop, but somehow managed to get going again. That's a race, that as a handicapper, you can toss out, simply because he didn't get a fair shot at the leaders in the stretch.

Looking at his win prior to the Kentucky Derby in the Arkansas Derby, we find that he also ran near the back of the pack early and made his run going into the stretch. In a race that was slowing with every quarter mile, he ran the last 1/8 to the wire faster than the leader had run any eighth of a mile. This indicates that Creator starts very slowly and picks up speed as the race goes on, so it's not surprising that he was able to get up in time to beat the front-running horse as they went through the stretch.

The 2014 winner, Tonalist, is a different story. He was a fairly fresh horse, having not run in either of the previous Triple Crown races, and prepped for the Belmont by running - and winning - the Peter Pan Stakes at Belmont Park.

An excellent "stalking" horse, he was able to get into the position he wanted early in the race, took over the lead a half-mile in and slowly edged away from the pack.

The fact the race was held at Belmont is significant as it showed he could handle the track (in fact, five of his six lifetime graded-stakes wins have now come at Belmont), and his running style is historically the perfect fit for winning the Belmont, as most winners (with Creator being an exception) don't usually come from way back to win.

So there are some key factors to consider when handicapping the Belmont and making your Belmont Stakes picks. One, horses that have shown to be able to pick up the pace late in their winning races have a shot at running down the leaders in the long Belmont stretch drive.

Two, horses that have scored a win with an upfront, stalking style over the Belmont track are likely to be in the mix late in the race. And three, pay attention to pedigree when considering whether a horse can win at 1 1/2 miles.