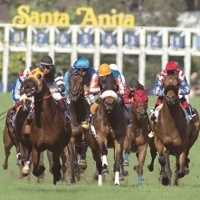 The Breeders Cup current Turf Sprint odds are swept from all the best online providers available to US horse racing fans.

You can get Breeders’ Cup Turf Sprint odds as well as results and payout information on your PC or mobile device when you open an account and bet the races with any of these top-rated and secure online racebooks.

Given the different conditions the race is run under - which depends on the track - it's perhaps more difficult to use past races as a means to provide Breeders' Cup Turf Sprint betting tips.

At Santa Anita, in particular, the race is run on the "downhill" turf course, which starts with a right-hand bend that is not the norm for most tracks. It is one of the few times in North American racing where having an outside starting post can be an advantage, as the outside runner will be able to make the bend first and can be in the lead going into the normal left-hand turn and onto the straight.

So despite the short distance of the race, horses that have a lot of early speed and are starting from the outside post position should be given some consideration in handicapping the race when it is run at Santa Anita.

As the distance and track configuration plays a large factor in the outcome, the odds on the Turf Sprint tend to be spread out across the field most years, and although a fair number of favorites have won the race (four times in nine races) the odds on those horses averaged 3-1, which is not a bad rate of return for people who like to bet on the favorites.

On the other hand, of the five non-favorites to win, the odds on the winner averaged 15-1, although this number is slightly skewed by the fact the very first winner, Desert Code in 2008, was a big longshot at 37-1. In three years, the winner happened to go off at odds of 7-1.

Another notable factor in regard to the Turf Sprint is that although European horses do well in most Breeders' Cup turf races, the Turf Sprint has been a big exception. In fact, when Obviously won in 2016, he became not only the first European-bred winner of the race, but the only Euro to crack one of the the top three spots in the history of the race.

Obviously started his racing career in Ireland, ran three times and was moved to the US, where he ran the rest of his 26 lifetime starts. Until they start to gain some results, it's safe to say that European-breds should be viewed with some reservation when it comes to betting the race.

Perhaps not a sure-fire handicapping factor, it is also interesting to note that although the Turf Srpint is open to horses aged three and older, only one horse - Bobby's Kitten in 2014 - has won the race as a three-year-old.