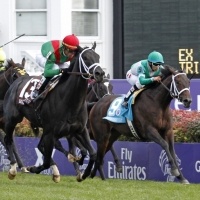 Making an accurate Breeders’ Cup Turf prediction is a challenging handicapping task, but putting down a wager on your selection is easy when you do so on your PC or mobile device through an account with one of these recommended online racebooks.

Over the first 10-year history of the Breeders' Cup Juvenile Turf, the race proved to be fairly lucrative from a betting angle. Since the first winner, Nownownow, who crossed the line in front at Monmouth Park in 2007 at odds of 13-1, only one favorite had won the race, that being Pounced (2-1) in 2009.

This past year produced the second favorite to win, as Mendelsshon won at fairly big odds of 5-1 in what was a very spread out field in terms of post-time odds.

Otherwise, the average payout on the Juvenile Turf winner over the years has been around 7-1, with Nownownow and Wrote (12-1 in 2011) both scoring the win at double-digit odds.

Although favorites have come up short in the Juvenile Turf in 10 of 11 races, it's important to note that outside of actually winning, favorites have done very well in the race, finishing second four times and third twice for a total of seven in-the-money finishes. That is slightly above the accepted average for thoroughbred horse racing.

Part of the challenge of horse racing handicapping (the most fun part) is finding the overlooked longshot that will key big payouts. But the other equally important part is balancing that against the fact the betting public is typically very good at identifying the horse most likely to win.

Horses going into the Breeders' Cup Juvenile Turf are only in their first year of racing and usually only have a few races on their resume with which to evalute their status.

Only one winner of the previous five (Outstrip, 2013) was a European-bred horse but four of five had done all of their racing overseas before shipping to the US to win the BC Juvenile Turf. This was also the case with Mendelssohn in 2017, as he is a Kentucky bred colt who had run all four of his previous races in Ireland and the UK.

This says a lot about the quality of grass racing in the UK and Europe - the competiton is tougher on the grass over the pond.

It's difficult to overstate the importance of the quality of competition in Europe when it comes to grass racing when evaluating horses shipping in to take on US based runners.

Of the European horses that won in the past six years, only Hit It A Bomb had won his race immediately prior to the Breeders' Cup, and so at first glance it would be easy to dismiss these horses when compared to US runners that come into the race off of one or more consecutive wins.

Two of the four had finished third in the Group 1 Dubai Dewhurst Stakes at Newmarket in England, while two others has finished second in the Group 1 Darley Prix Momy in France. Medelssohn also had his final prep in the Darley Dewhurst, where he ran second. Clearly these are key races to analyze when handicapping the Juvenile Turf.

Consider Horses Cutting Back in Distance

The exception to all this is the most recent winner, Oscar Performance, who had raced three times in the US prior to the Breeders' Cup. Oscar Performance's win also points to another handicapping angle to consider, in that he won his start prior to the BC Juvenile Turf by an easy six lengths, taking the field wire-to-wire.

That race, the Grade 3 Pilgrim Stakes at Belmont, was run at 1 1/16 miles. He then went into the Juvenile Turf, which was actually a cut back in distance to one mile, where he again essentially took the field wire-to-wire.

Speed horses that win on the lead and then cut back in distance for their next race are very dangerous, and should be given serious consideration.

The bottom line is that if you want to successfully bet turf races in the Breeders' Cup, it's imperative that you take the time to study up on turf racing in Europe.