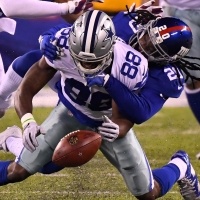 There are some epic rivalries in sports. The NHL has Leafs-Canadiens, MLB has Red Sox-Yankees, the Premier League has Manchester United-Manchester City and the NBA has Celtics-Lakers, just to name a few. However, when you look at the National Football League’s greatest rivalries of al time there are probably none better than the Dallas Cowboys and New York Giants. The exact beginning of this longstanding rivalry is hard to trace, but the Cowboys and Giants first clashed on Dec. 4, 1960 when both teams battled to a 31-31 draw. [+]

Since then, the NFC East rivals have faced off more than 100 times and have provided fans with some exciting football matches along the way.

Take a December 2011 game for instance, when the Giants and Cowboys met with the NFC East division title on the line. Dallas led for most of the game and were up 34-22 with just over five minutes remaining on the clock. Quarterback Eli Manning led the Giants to one of the club’s greatest comebacks as New York took a 37-34 lead late in the game. Jason Pierre-Paul blocked a game-tying field goal attempt by the Cowboys with just a second left as the Giants secured the thrilling victory.

In 2007, the Cowboys ran the table against the Giants — winning both of their regular-season meetings and earning the top seed in the NFC. As it turned out, the rivals would meet in the playoffs, with the Cowboys entering the highly anticipated matchup as clear-cut favorites. The fifth-seeded Giants went to Texas Stadium and stunned the Cowboys en route to winning the Super Bowl championship against the New England Patriots. It marked the only time the Giants and Cowboys have met in the post-season in 57 years.

It would also be the first of two titles for the Giants, who went on to win the Super Bowl again in 2011 with Manning leading the way.

Greatest Sports Rivalries Of All Time

Betting on this rivalry can sometimes be a little complicated. Regardless of where these two clubs sit in the standings, they always seem to bring out the best in one another — creating that edge-of-your-seat type of football.Do your research before embarking on a wager between these two clubs. We are here to help with our Sports Rivalries video series, which profiles the best rivalries in sport.

What makes the Giants vs. Cowboys rivalry so fierce?

It hasn’t always been the Giants winning this rivalry over the years. In fact, the Cowboys have won more than 60 times in the 100-plus meetings since 1960 when they hit the field for the very first time. In 1966, Dallas trounced New York 52-7 in what still stands as the largest margin of victory between the two clubs.

Tony Romo is the Cowboys’ all-time franchise leader in passing with more than 34,000 yards and 248 touchdown strikes. How does that compare to Manning?

The Giants’ quarterback has thrown for more than 48,000 yards to go along with 320 touchdowns and, oh yeah, two Super Bowl rings.

While previous years have provided fans with enough excitement, the Cowboys and Giants rivalry is only going to get more compelling, which also means bettors will be more enticed to put more money on the teams when they clash twice each season.

There is probably no other player in the NFL more exciting to watch than Giants wide receiver Odell Beckham Jr. Whether it’s his highlight-reel one handed catches his blazing speed, the Giants will be set offensively for years to come as long as OBJ is on the field. His numbers back that up as Beckham Jr. finished third in receiving yards (1,367) and touchdowns (10) during the 2016 campaign.

The Cowboys are turning a new page with a pair of young rising stars — quarterback Dak Prescott and 2016 rushing champion Ezekiel Elliott.

Prescott took advantage of an early opportunity as Dallas’ No. 1 quarterback after Romo went down with a long-term back injury. The rookie QB led the Cowboys to a 13-3 record and first place in the NFC East. Elliott quickly became the NFL’s most lethal rusher, leading the league with 1,631 rushing yards.

Are you ready to put your money down on the Giants-Cowboys rivalry? Here are a few online sportsbooks to consider before placing your bets.