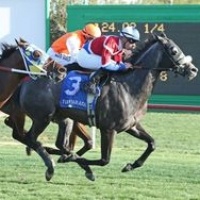 The major focus of thoroughbred and Quarter horse racing in the desert southwest of the United States, Turf Paradise Racetrack, is located in north Phoenix, Arizona,  and has been offering live racing for more than 60 years. The typical fall/winter meet at Turf Paradise runs from mid-October to the first week of May. The track has both turf and dirt racing surfaces.  The track also hosts special events, such as an annual Kentucky Derby Party on the first Saturday of May.

If you can’t get to the track to make your Turf Paradise horse racing picks, you can easily wager from your home PC or mobile device with an account at one of these top racebooks.

While Turf Paradise doesn't play host to any major graded-stakes races, that doesn't mean there isn't top-notch racing to be bet on during the track's 130 days of racing - one of the longest racing meets in the US. In total, the track holds 19 stakes races for thoroughbreds throughout the season with one other for Quarter horses, with these races offering more than $600,000 in purses.

Handicappers at Turf Paradise are wise to keep an eye on horses shipping in from California and elsewhere and taking a class drop to run in the major Turf Paradise stakes races.

Named for the late, long-time coach and excutive of the Phoenix Suns NBA basketball team, the Cotton Fitzsimmons Mile is held in mid-January and is run on the Turf Paradise turf course, with a purse of $75,000. For 2017, the Cotton Fitzsimmons produced huge payouts, as 17-1 longshot Ten Carat Rock took the win over the heavily favored Power Ped, with 53-1 Red Zeus running third.

In addition to Ten Carat Rock paying $37.60 for a $2 Win bet, a $2 exacta paid $130.10, and a $1 trifecta paid more than $2100. Although previous race winner Power Ped was a deserving favorite, Ten Carat Rock was a definite overlay at such high double-digit odds. A Maryland-bred gelding, he had won his previous three races, including his previous start on the Turf Paradise turf course in a race also run at one mile, showing an obvious like for both the course and distance.

The signature race of the Turf Paradise meet, the Turf Paradise Derby is run in mid-February, and for 2017 offers a purse or $50,000. The race is open to three-year-old horses and is run at a distance of 1 1/16 miles on the dirt track.

In the latest editin of the race, in 2016, the "chalk" held up (that is, the favored horses finished in the top three spots) led by favored Nightly News, followed by 4-1 Gunfire and 3-1 Arizona Moon.

One of the more significant winners of the Turf Paradise Derby in recent years was Startac, who used his victory in the 2001 event as a launching pad to a solid graded-stakes career, during which he won the Grade 1 Secretariat Stakes and the Grade 2 Belmont Breeders' Cup Handicap.

The premier race for fillies at Turf Paradise, the Scottsdale Handicap, is open to female horses aged three, and is run at one mile on the turf course. Usually held in early or mid-March, the race offers a total purse of $30,000. Last year, Malibu Kash came back from a third-place finish in the Arizona Oaks to go wire-to-wire and take the win ahead of Hymn's Girl and the heavily favored Joan of Arch, who had finished ahead of her in the Oaks.

If you want to take in any of the great live racing offered at Turf Paradise, the track is located at 1501 W. Bell Road in north Phoenix. There is live racing in the afternoon every Saturday through to Wednesday (check the website, as post times vary slightly throughout the meet). The track is also open seven-days-per-week for simulcast race wagering.