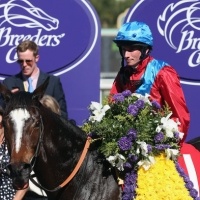 While the Breeders' Cup Classic is the grand finale, the Breeders' Cup World Championships is more than just one race. First held in 1984, the idea behind the Breeders' Cup is to bring together the best horses in the world to run against each other at their specialty distance on either dirt or turf. Over the years, the Breeders' Cup has expanded from eight races on a single day, to 14 races held over two days and has included horses from a dozen different countries. Future bets are now available for the 2018 Breeders' Cup at Churchill Downs on November 2nd and 3rd.

One of the biggest single-event betting opportunities in the world, in 2017 the total wagering handle on all Breeders' Cup races was more that $165 million, with the betting highlight being the $135 payout on a $2 Win bet on Bar Of Gold in the Filly and Mare Sprint. Although every race won't provide that kind of return on investment, the chance to find a long shot winner is part of what makes the Breeders' Cup the favorite racing event for horseplayers.

With the countdown on to Breeders' Cup weekend, the fields for the two biggest races - the $6 million Classic and the $2 million Distaff - are starting to take shape.

Several horses have already qualified for these two races through the Breeders' Cup 'Win and You're In' race series, which offers an automatic entry to horses that run first in selected races held in the United States, Canada, the United Kingdom and elsewhere.

This being the case, there are already future bet options available for these races. For the Breeders' Cup Classic, top contenders include Accelerate who has won two consecutive Grade 1 races and is listed as the current favorite at odds of 3-1. Another top contender is Catholic Boy, who has had mixed results recently racing on both turf and dirt, but found the dirt to his liking when he won the Grade 1 Travers Stakes as an 11-1 upset and can be had right now in a BC Classic future bet wager at odds of 7-1.

Top European hopes rest with Mendelsshon, who was a big disappointment in the Kentucky Derby but who seems to be getting more comfortable with North American racing. He turned in a very good performance to run second in the Travers and is on the BC Classic board right now at odds of 11-1.

Given that she's been dominating all her races against females, there's an outside chance that Monomoy Girl will take on the boys in the Classic, and if you like the filly's chances, you can find her at a huge 79-1 in some future wager pools.

Looking at a couple other longshots, 2017 Breeders' Cup Juvenile champion Good Magic is 13-1 to turn the Juvenile/Classic double, while 2018 Triple Crown contender Bravazo is 30-1, and is always worth consideration in exotic bets like exactas and trifectas.

Others to watch in the weeks ahead include Diversify at 10-1, and the always popular Gronkowski at future bet odds of 22-1.

Turning to the female side of things, the previously mentioned Monomoy Girl is undefeated in five races so far this year, and is a deserving future bet favorite at odds of 3-1. But in a bit of surprise, she has company at the top of the list in the form of Abel Tasman, also at 3-1. She was the runner-up in the 2017 BC Distaff, and is currently riding a two-race winning streak of her own.

Those two could face their biggest challenge from the 5-1 Elate, who was fourth in the Distaff last year, and who has been first or second in seven of her last eight races. Last time out she gave Able Tasman all she could handle in the Personal Ensign Stakes at Saratoga in August, finishing just a neck back after a thrilling stretch drive.

All of the other fillies and mares on the Breeders' Cup Distaff future odds list are currently in double-digit odds, which for bettors simply means there are lots of opportunities to look at upset chances and big payouts in exactas and trifectas.

One intriguing option is Wonder Gadot at 14-1. After battling Monomoy Girl right to the wire in the 2018 Kentucky Oaks at Churchill Downs this past May, she went back to her native Canada and dominated running against males in the Canadian Triple Crown series, winning the Queen's Plate and Prince of Wales Stakes. Her connections then made the curious decision to run her against the big boys in the Travers, where she was in contention early but faded down the stretch.

That experiment behind her, she'll be back racing her own gender in the BC Distaff, and a repeat of her performance the last time she was at Churchill makes her a contender.

As for the big-price long shots, Eskimo Kisses made a huge break-through in winning the Grade 1 Alabama Stakes at Saratoga a few weeks ago, and appears to be rapidly improving at odds of 12-1, while the speedy Midnight Bisou has finished in the money in all nine of her career starts - with four wins - and could be the sleeper pick of the entire Breeders' Cup weekend at a very generous 25-1 in the futures.

A lot can happen between now and the first weekend of November when the gates fly open for the 2018 Breeders' Cup, and it's yet to be seen who the favorites will be on race day. With that in mind, getting a future bet down now on your best bet to win the Classic and Distaff could result in your biggest payday of the year.