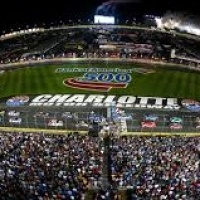 Designed and constructed by current chairman and NASCAR Hall of Famer O. Bruton Smith, Charlotte Motor Speedway is one of the most legendary and traditional courses on the NASCAR Monster Energy circuit. Smith partnered with Curtis Turner, another NASCAR Hall of Fame inductee, to operate the track when it opened. Smith was a North Carolina automobile dealer and short-track stock car racing promoter at tracks like Concord Motor Speedway and the Charlotte Fairgrounds. [+]

Turner, who made his fortune in the lumber business, was one of the first drivers on the NASCAR circuit after the sanctioning body was originally born in 1949. As a team they assembled their dream 1.5-mile superspeedway on the outskirts of the Queen City. On June 19, 1960, the inaugural World 600 was held at Charlotte Motor Speedway. The track holds seating capacity for 89,000.

It just wouldn't be Memorial Day weekend without the Coca-Cola World 600. Like Richard Petty, the Earnhardts and the France family, it is a NASCAR staple. But it's just part of the racing story at Charlotte Motor Speedway.

Billed as "The Greatest Place To See The Race," Charlotte also plays host to two other major NASCAR events, the Monster Energy NASCAR All-Star Race, in which race fans get to pick some of the participants, and the Bank of America 500.

One of the busiest sports facilities in all of North America, Charlotte Motor Speedway plays host to roughly 380 events during an average calendar year. Besides contesting virtually every form of auto racing imaginable, the track also is the home for the twice yearly Charlotte Auto Fair, one of the largest car shows in the United States. You never know what you might find there, and in fact a few years back, NASCAR driver Joey Logano picked himself up a Ford Model T from the 1920s at the fair.

Charlotte Motor Speedway is also a popular destination for movies, television and the filming of ads. Its history makes the Charlotte track a popular tourist destination, and its proximity to the vast majority of NASCAR team shops makes it an ideal location for testing. You can also test your own mettle by putting the pedal to the metal at one of Charlotte's many racing schools.

If you'd rather leave the racing to the pros, feel free to peruse our list of trusted online sportsbooks below, and the next time your favorite drivers are racing at Charlotte, why not place a wager on them?

They own this place

Two of auto racing's signature events are held on the Sunday of Memorial Day weekend - the Indianapolis 500 in the afternoon and Charlotte Motor Speedway's Coca-Cola 600 in the evening - and some racing stars have opted to turn a double play that day.

John Andretti was the first to attempt it in 1994, and Kurt Busch the most recent in 2014. Tony Stewart and Robby Gordon also did the double. Stewart, in 2001, was the most successful of the quartet. He finished sixth at Indianapolis and third at Charlotte, completing all 1,100 miles of racing on the day.

Sometimes it's a drag

Opened in 2008, the zMAX dragway at Charlotte Motor Speedway features the only all-concrete, four-lane drag strip in the United States.

It plays host to the NHRA Charlotte Nationals every September, and you'll see the best of the best burning out and burning up the one-mile track. That's because the NHRA’s best drivers begin their quest for supremacy in the first race of the six-race NHRA Mello Yello Series Countdown to the Championship at zMAX Dragway. The drag strip offers seating capacity for 30,000.

Ready for a close up

Charlotte Motor Speedway has provided the backdrop for several motion pictures. Days Of Thunder, Stroker Ace and Talledega Night: The Ballad of Ricky Bobby, all filmed there.

In 2006, Charlotte Motor Speedway became the first motorsports facility to host the world premiere of a major motion picture, when more than 30,000 fans, along with film stars such as Paul Newman, Owen Wilson, Bonnie Hunt and Larry the Cable Guy were on hand for the debut of the Disney/Pixar animated movie Cars.

Debuting in May of 2000, The Dirt Track at Charlotte, a state-of-the-art, four-tenths-mile clay oval was completed across the road from the speedway. The stadium-style facility seats nearly 14,000 and plays host to Dirt Late Models, Modifieds, Sprint Cars, Monster Trucks and the prestigious World of Outlaws Championship Finals.

Looking ahead, Charlotte Motor Speedway will bring an entirely new look to the Chase for the NASCAR Monster Energy Cup in 2018. Charlotte's new "roval," a 13-turn, 2.4-mile infield road course, will play host to a playoff race next season. It will be the first road course circuit that's part of the 10-race championship contest.