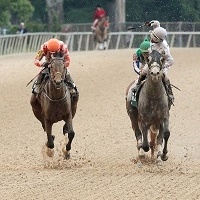 Since 1968, the Southwest Stakes at Oaklawn Park has been one of the highlight races of the Hot Springs, Arkansas track's Winter-Spring race meet.  The race is open to three-year-old horses and was originally run at the distance of six furlongs. That was increased to one mile in 1984, and was increased again to its present distance of 1 1/16 miles in 2013. Considered one of the early prep races for the Kentucky Derby, the winner of the Southwest is awarded 10 points toward a starting spot in the Derby.

If you can't take in the Southwest Stakes in person, you can still get down a bet and then find instant Southwest Stakes results if you open an account to wager with one of these top rated online racebooks - and collect bonus cash as well.

First run as the Southwest Handicap, the Southwest Stakes is typically run in mid-February at Oaklawn Park, and is the first of three Kentucky Derby prep races for three-year-old horses held at the track. As mentioned above, the distance of the race has been increased over the years from six furlongs, to one mile and now to the present 1 1/16 miles, and the total purse for the race has increased as well, to the present $500,000. The race held graded-stakes status in the late 1990s, and after being downgraded for a period of time in the early 2000s was then granted Grade 3 status again 2008, and it has remained as such ever since.

Due to an over-abundance of posssible entries, the Southwest was actually run in two divisions three times in its history, in 1972, 2002 and 2012. Most recently in 2012, the trainer-jockey combination of Bob Baffert and Rafael Bejarano captured both of the Southwest races, first with 7-1 shot Castaway, and then with heavy favorite Secret Circle. Baffert and Bejarano would team up again to win the race in 2013, giving Baffert his fourth Southwest win in five tries. The late, legendary Oaklawn trainer Robert Holthus holds the record for having won the race five times, first in 1988 and then back-to-back in 2000/2001 and then again in 2005/2006.

Although in the early years the Southwest Stakes produced few winners that went on to have notable racing careers, more recently the race has seen a number of horses that have won the race and then followed up their victory by winning a handful of significant graded-stakes races later in their career. The turning point probably came in 2004, when Smarty Jones won the Southwest (on his way to sweeping all three of Oaklawn's three-year-old Stakes, incuding the Rebel and Arkansas Derby) and then took both the Kentucky Derby and the Preakness Stakes.

As well as Smarty Jones, other notable winners include Lawyer Ron, who also collected the Southwest/Rebel/Arkansas triple in 2006, won both the (G1) Whitney Handicap and (G1) Woodward Stakes, and was named the Eclipse Award Champion Older Horse for 2007. The 2012 winner, Secret Circle, was already a Breeders' Cup Juvenile Sprint winner the previous year, and then won his second Breeders' Cup race in the 2013 Sprint.

As part of the Kentucky Derby Challenge series, the Southwest awards the first four finishers in the race points toward a starting spot in the Derby on a 10-4-2-1 scale. For 2017, the Southwest Stakes will be run on Monday, February 20.