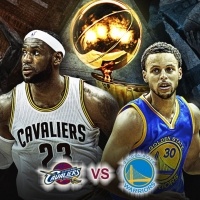 The Golden State Warriors and Cleveland Cavaliers are once again on the collision course for the NBA Finals, their third appearance against each other in as many years. The regular season was fun, and people entertained the idea that some team could upset one of them before they had a chance to face each other again, but deep down, even the devoted skeptics understood. They knew that this was always the way NBA's 2016-17 campaign was fated to end—with the defending champion Cavaliers taking on their arch nemesis, the 2015 champions.

Though LeBron James has denied it, just about everyone else admits it: The Cleveland Cavaliers and Golden State Warriors are a rivalry.

More specifically, they aren't just a rivalry. They are the rivalry—the defining head-to-head matchup that helps drive interest not just in the NBA playoffs and NBA Finals, but the league at large. You want to see what's going to happen between these two next. You can't help it, given all the history.

The Warriors came almost out of nowhere in 2014-15, Steve Kerr's first season as a head coach. They stampeded their way to the league's best record and, despite facing some early-round deficits, scrapped their way to the NBA Finals. A matchup with Cleveland and LeBron awaited them. It was James' first season back with the Cavaliers, and while he was less than efficient, he was carrying the team. Ultimately, injuries to Kyrie Irving and Kevin Love proved to be too much. The Warriors won.

Jump ahead to 2016. The Cavaliers didn't face much resistance in their NBA Finals path. The Warriors, though, fell behind 3-1 in the Western Conference Finals against the Oklahoma City Thunder. And yet, they still came raging back, rattling off three straight wins and earning another NBA Finals.

Once there, they dominated, winning four of the first five. The Cavaliers were done. Finished. Kevin Love trade rumors would be fired up in the offseason. Maybe Kyrie Irving would enter that sector, too. But the Warriors never closed. Draymond Green was suspended for Game 5, and the rest is literally history: LeBron James played out of his mind in Games 5, 6 and 7, and the Cavaliers came storming back to earn their first-ever championship.

The rivalry wasn't done yet, though.

Golden State countered Cleveland's victory by adding Kevin Durant, a former MVP and top-five overall player, to its 73-win core. Suddenly, even though their record is worse, they're scarier than ever.

Why is this important? Because it's this path to where we are now that renders the Warriors a better team. If they don't lose to the Cavaliers, they never land Durant. He's even admitted as much. With him, though, they are unguardable—both in the half-court and on the break. He is the most efficient volume scorer in NBA history and is now playing next to Stephen Curry, perhaps the second-most efficient volume scorer the league has ever seen.

And remember: Without Durant, the Warriors almost slaughtered the Cavaliers. They didn't just look like they were going to win; they were poised to dole out a five-game exit. Add Durant into that equation, and there's a chance, however slight, they end up sweeping the reigning champion Cavaliers in this Finals rubber match.

Don't let the romantics of last year's situation cloud your judgment. The Cavaliers have picked up their play in the postseason, but the Warriors need only a two- or three-minute burst to blow games wide open. Cleveland don't have that kind of luxury, nor do they have the defensive versatility to counter lineups that feature Draymond Green at the 5. LeBron may play some center himself, but there's no way around the outlook.

Not yet sold on the Golden State Warriors having the decided edge over the Cleveland Cavaliers? Consider some of the numbers.

Since LeBron James returned to Cleveland, the Warriors are 11-8, through both the regular season and playoffs, against the Cavaliers. If Draymond Green never gets suspended for Game 5 of the 2016 NBA Finals, this record might actually be 12-5 in the Warriors' favor. Think about that.

To the Cavaliers' credit, they have typically been able to hang tough. The Warriors have outscored them by a total of 120 points through these 19 meetings. That's about 6.3 points per game.

At the same time, when you look at only wins, there's no comparison.

In their eight wins against the Warriors over the last three years, the Cavaliers' margin of victory is 10.3 points—beyond respectable. But the Warriors have won their 11 games by an average of more than 18.3 points, a truly ridiculous number when you consider a lion's share of these square dances has come in the NBA Finals, when games, in theory, should be their most competitive.

The two regular-season meetups between these two offered more of this same back-and-forth. The Warriors won both contests, but one of them came by a single point, the other by 35 points.

Cleveland's only hope in the next best-of-seven series is to force its defense to hold serve. LeBron will ensure the Cavaliers get points, but they were among the league's most porous teams during the regular season.

Both teams will enter with top-three postseason marks in points allowed and scored per 100 possessions. But that's business as usual for Golden State. The Cavaliers have yet to prove they can sustain their defense for more than a few games at a time.

And thus, the disparity that exists in name power is confirmed in the numbers: The Warriors are by far and away the better team.